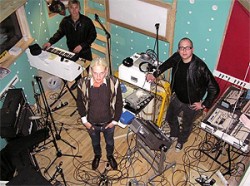 FÜR ANFANG 2008 IST DAS ERSTE ALBUM DER SCHWEDISCHEN AGENT SIDE GRINDER ANGEKÜNDIGT. NACH DER ÜBERZEUGENDEN DEBUTSINGLE 2007 DARF MAN AUF EINE SEHR INTERESSANTE VERÖFFENTLICHUNG GESPANNT SEIN. WER HINTER ASG STECKT, WAS AUF DEM ALBUM ZU ERWARTEN IST UND WEITERE FRAGEN KONNTEN WIR IN DEM FOLGENDEN INTERVIEW KLÄREN. WHEN DID YOU START AGENT SIDE GRINDER AND WHAT ARE YOUR INFLUENCES? K: I came along for about 3 years ago; Johan and Peter had played for half a year already, but badly in need of a singer. My personal influences stretches from Bryan Ferry to Autechre, and out on the sides from that, so it’s quite hard to find a central core but I guess it has been running between charismatic singers and obscure noise all along (I grew up with aPHEX tWIN and THE gUN cLUB). P: Johan And I recorded some tracks together with a band Johan played in at that time in the Studio of Lobotom this was 2004. We both started to talk about do some music together. My background in the field of electronic, tape recorders and building stuff mix with Johan’s musical background in soul and funk music and Kristoffers’ writing and his no fear for the stage feeling is a really great combination! J: My main influences stretches from pop, soul, disco to electronic music. I’ve got a huge interest in music. My all-time favourite songwriters are Bowie, Lennon/ McCartney and Paddy McAloon. HOW MANY BAND-MEMBERS DO YOU HAVE? P: The bands base is Kristoffer, Johan and me, but our recording engineer Henrik Sunbring and our bass player Alex get a more and more important roll in the sound of the group, Henrik build his own filter and stuff and also play synthesizer now. IS “AGENT SIDE GRINDER” YOUR FIRST CONTACT WITH THE MUSIC BUSINESS? K: I had never sung a note before, not to mention written a single lyric, so it has all been a most revelating endevour. P: I have been playing in one band before and I have been doing this tape things since many years before, kind of the normal history, did radio at a radio station when I was 15 then filling my first apartment with tape machines and synthesizers now we have a very nice cubic practising room/ studio. J: I’ve been involved in several Swedish independent pop/electronic bands before as a musician and songwriter. I’m also releasing a solo-album later this year, far more pop-oriented and more melodic than Agent Side Grinder. YOUR 7” HAS BEEN RELEASED SOME MONTHS AGO. TELL US SOMETHING ABOUT THE FEEDBACK YOU´VE GOT FOR THIS VINYL. P: Most people think this is a really important independent 7”. Both black dressed people and pop kids like its industrial pop. YOUR DEBUT ALBUM IS ON THE WAY. WHAT AWAITS THE FANS OUT THERE? K: The first time will be a mindblowing experience; this is the new way, like you never expected it to be!!! P: Computer and sequencer free music we play by our self we don’t waste time on programing we practise instead, one part of the record is a recording of my bed then we did a tape loop of it. This is the beginning of the record. J: It’s a raw and energetic record, but also very diverse with a lot of moods. Electronic music like this is very rarely produced today. We had an idea of dividing the record with an intense, hard A-side and a cool, atmospheric B-side, much like Bowies Berlin albums. WHERE DID YOU PRODUCE THE ALBUM? We wrote the songs in the former Lobotom Ton Studio now days our own place!! Then we recorded everything in the Helter skelter studio of Stockholm. We used totally 10 amplifiers at the same time and 16 microphones. ARE YOU PLANNING A TOUR TO PROMOTE YOUR DEBUT? IS THERE ANY CHANCE TO SEE YOU ON STAGE IN GERMANY? P: If someone ask us to come and play we do this for sure!! If we get 400 euro we can drive down and home!! WHAT DO YOU THINK ABOUT THE INTERNET ? K: The Internet is a brilliant tool to spread your music very very fast around the globe, but at the same time like a Democles-sword it makes record-selling an altogether more uncertain bussines… I’m quite ambivalent about it all. P: Today people have these fantastic tools of communication but never in the history of the human kind people have been this lonely!!!!! J: An excellent medium to control the masses. Just kidding, I agree with Kristoffer and Peter. I certainly want people to pay for music and movies. But in general, I’m addicted to the Internet and online 24/7. THANK YOU VERY MUCH FOR THE INTERVIEW. THE LAST WORDS ARE YOURS. Open reel recorders are dangerous the machine can strangle a person a laptop cant!!!