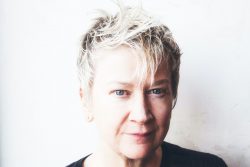 FOR ABOUT 40 YEARS, THE BRITISH POET HAS BEEN INVOLVED WITH MUSIC AND TODAY IS KNOW AS „THE GRAND DAME OF DARK WAVE“. DURING THE COURSE OF HER CAREER SHE HAS CREATED HITS LIKE „OUR DARKNESS“ AND „SLEEPER IN METROPOLIS“, WHICH ARE ALL STILL IN THE REPERTOIRE OF MANY DJS AND HAVE INFLUENCED MANY OTHER MUSICIANS.

IT WAS ALSO 35 YEARS AGO WHEN I FIRST NOTICED ANNE CLARK. SHE PERFORMED „OUR DARKNESS“ IN THE 80S CULT SHOW „FORMULA 1“ AND I JUST THOUGHT: `THIS GIRL DOESN’T SING AT ALL, SHE JUST RECITES TO THE MUSIC`. AT THAT MOMENT I COULDN’T , QUITE COMPREHEND BUT TO THIS DAY IT LEFT A LASTING IMPRESSION ON ME. SO MUCH SO THAT I BOUGHT ALL OF HER ALBUMS AND SHE IS THE ARTIST I HAVE SEEN LIVE THE MOST.

NOW SHE HAS A NEW RELEASE COMING OUT  „SYNAESTHESIA – ANNE CLARK CLASSICS RE-WORKED“ AND I WAS SO FORTUNATE TO TALK TO HER ABOUT IT.

LAST YEAR WE WERE ALL HIT WITH THE COVID 19 PANDEMIC, THE AFTERMATH OF WHICH WE’RE STILL DEALING WITH TODAY AND NO ONE KNOWS HOW IT’S GOING TO LOOK IN THE FUTURE. AND THEN YOU SHARED THE SHOCKING NEWS THAT YOU HAD CANCER. FIRST OF ALL THE QUESTION: HOW ARE YOU?

I’m still here! And for me that is a huge reason to be positive and celebrate. Things looked very bad last year and there is no guarantee that the cancer will not return … but … right now I am feeling very good.

To receive the treatment I did at the onset of a pandemic was truly amazing. I can never express my gratitude enough to the doctors and nurses who saved my life.

It was completely surreal to be diagnosed with cancer in the same week the whole country went into “lockdown.”

NOW YOU’RE BACK WITH YOUR NEW ALBUM „SYNAESTHESIA“, HOW DID THIS PROJECT COME ABOUT?

At the beginning of last year, my band and I began rehearsals for a major “40th Anniversary Tour”. Two new members had joined the line-up, we were preparing new material and a new live set. Then everything stopped. If my illness hadn’t have forced me to cancel my tour, then the Corona virus would. Like everyone, life changed completely for me in what seemed like the blink of an eye. Direct contact and travel became impossible. So, how could I maintain some kind of active connection with my audience? Many people have contacted me over the years with requests to remix my material and occasionally I have collaborated on these ideas (Wordprocessing back in the 1990s for example). It seemed a good time to look at the idea again.

TO WHAT EXTENT WERE YOU INVOLVED IN THE PRODUCTION OR DID THE ARTISTS LIKE SOLOMUN, ROBIN HIRTE, ANDREAS BRUHN (EX-SISTERS OF MERCY) AND OTHERS, HAVE THE LIBERTY TO BRING IN THEIR OWN SOUND IN TO THE SONGS?

A number of the tracks are collaborations from recent times. ENTIRE WORLD I wrote with Thomas Rückoldt as part of our STOP BREXIT! single in 2019. We used a translation of Schiller’s  AN DE FREUDE in the main track and loved it so much that we did some different mixes. TAKE CONTROL I wrote with Solomun, also in 2019. ORANGE SUNS was a song I wrote with herrB for our 2016 live tour set. Apart from these, FDA and I approached a number of artists and invited them to take part.

THE SONG SELECTION IS ALSO VERY VARIED, NOT JUST „OUR DARKNESS“ AND „SLEEPER IN METROPOLIS“. DID YOU SELECT THE SONGS OR DID THE ARTISTS HAVE AUTONOMY HERE AS WELL?

Well, I definitely didn’t want 14 versions of OD or SLEEPER! 😉 As much as I love these tracks, it was very important for the whole spectrum of my catalogue to be considered. Also, I wanted the versions, or at least some of them, to be as radical as possible.

Yes, we did a version together back in 2002 and they were very enthusiastic about being included in the new project.

I HAVE LISTENED TO THE ALBUM SEVERAL TIMES AND THERE IS ALWAYS SOMETHING NEW TO DISCOVER, YET „HOPE ROAD“ FALLS COMPLETELY OFF THE RADARIN THIS RELEASE. THERE IS HARDLY ANYTHING LEFT OF THE ORIGINAL, NOT EVEN THE PERFORMER. I ONLY RECOGNIZED THE TRACK BY THE LINE „MIXED BADLY WITH THE REVELLERS, MIXED BARCARDI, WINE AND BEER“. THERE IS NOT MUCH ABOUT DEADBEAT ON THE NET, CAN YOU TELL MORE ABOUT HIM?

Deadbeat (Scott Monteith) is one of my favourite artists at the moment. He is involved in numerous diverse, very extreme and challenging projects – and I love that! As I said, I wanted some very radical elements on Synaesthesia. Throughout my career I have been very conscious about the need to challenge myself and my audience. I don’t want to be a lazy artist and I don’t want a lazy audience. Mostly I have been blessed with an audience who tolerate that! 🙂 Synaesthesia is a RE-WORKS album. The clue is in the title. I gave the people involved pretty much total freedom to interpret the material however they wanted and this is how Scott “heard” his re-work.

You should be able to find his material on-line. May I suggest this album: open.spotify.com/album/4cVXuR4aMZmJ6xasLcodRa?si=GhnPjDwkTlOAzdkM2SEa0g

WHAT’S NOTICEABLE, AND HAS BEEN FOR MANY YEARS, IS THE FACT THAT YOU’VE BEEN COLLABORATING WITH A LOT OF GERMAN MUSICIANS, REMIXERS, DJS AND PRODUCERS LATELY. IS THIS DUE TO THE LARGE FANBASE IN GERMAN-SPEAKING COUNTRIES? YOU’VE ALWAYS BEEN A WELCOME GUEST ON STAGES HERE.

Germany is my spiritual home, that is for sure! I have an enormous link with people there and have done even before I started my music career. I also love German literature, art, cinema and culture in general. I can’t explain where that link has come from but it is wonderful!

SINCE THE BEGINNING OF YOUR CAREER YOU’VE COLLABORATED WITH FANTASTIC MUSICIANS: DAVID HARROW, CHARLIE MORGAN, MARTYN BATES THEN LATER WITH JEFF AUG, MURAT PARLAK, RAINER VON VIELEN AND MORE RECENTLY HERR B AND THOMAS RÜCKOLDT, JUST TO NAME A FEW. THUS, DURING THE COURSE OF YOUR CAREER, NEW CHARACTERISTICS OF YOUR MUSIC EMERGED AGAIN AND AGAIN, THERE WAS NO STANDSTILL. ELECTRONIC, SOMETIMES ACOUSTIC AND NOW AGAIN MORE ELECTRONIC. IF YOU LOOK BACK TO YOUR BEGINNINGS NOW, WOULD YOU SAY TO YOURSELF: I DID EVERYTHING RIGHT AND WAS LUCKY OR WOULD YOU HAVE APPROACHED SOME THINGS DIFFERENTLY?

I have been EXTREMELY lucky and blessed with my work for more than 40 years now – that’s for sure! Overall I  have cherished every creative element and moment with the amazing musicians I have worked with during my career. Of course there are always things I would have liked to have done differently but I don’t look back like that. Once the material is written, recorded and released it belongs to the audience. It’s up to them to interpret it and take from it what they want. My work is about human emotions, strengths and weaknesses, the great, awesome natural world, worlds we maybe don’t even know about. For me that means using all styles, all genres. Creativity should be organic and as spontaneous as possible. There is always something new to discover.

SOME OF THE ALREADY MENTIONED SUPPORT YOU NOT ONLY IN THE STUDIO, BUT ALSO ON STAGE EVERYBODY GIVES THEIR BEST, HERE ALSO VARIETY IS THE ORDER OF THE DAY. IS THAT THE ADVANTAGE OF HAVING A FEW PROJECTS ON THE GO, SO THAT YOU ARE SOMETIMES ON STAGE WITH A BAND OR, FOR EXAMPLE, WITH HERR B AS A DUO?

HOW FAIR IS TODAY’S MUSIC BUSINESS, YOU HAVE HAD SOME BAD EXPERIENCES IN THE PAST. WHAT DO YOU THINK OF SPOTIFY AND CO?

The music “business” is rotten to the core. It always has been and it always will be. Generation after generation of new talent arises, occasionally creating whole new ways of releasing and distributing  material. The rise of technology over the past 20 years has been the best example of that. For a while there is a direct contact between artist and audience. Then the Behemoth that is the music “business” swallows it up and takes it over. It will always be a game of cat and mouse between business and artists.

FROM YOUR POINT OF VIEW IS BANDCAMP ANY BETTER? YOU ARE OFFERING MANY OF YOUR ALBUMS THERE IN DIGITAL FORM.

All options should be considered by artists. The music business will use all options to take control.

THEN THERE’S PATREON, A KIND OF CROWDFOUNDING.

Yes, that’s a fascinating concept also. I’ve looked at it and maybe in the future it might be something I’ll consider.

I ALWAYS TRY, TO BUY ARTISTS‘ RECORDS AT CONCERTS. I THINK IT’S A WIN-WIN SITUATION. MORE MONEY IN THE ARTIST`S POCKET AND I MIGHT EVEN GET MY COPY SIGNED. THE ONLY DRAWBACK IS THAT I DON’T KNOW THE NEW SONGS AT THE CONCERT.

Oh …. be sure …. there’s still someone there making a claim, even on concert merchandise! When it comes to “new song” – Be open! Be adventurous! Take a risk…

THANK YOU SO MUCH FOR GIVING ME THE OPPORTUNITY TO INTERVIEW YOU. ALL THE BEST FOR THE FUTURE AND ABOVE ALL STAY HEALTHY. HOPEFULLY WE`LL ALL GETOUT OF THIS PANDEMIC ALIVE, AND WE ARE LOOKING FORWARD TO A TIME WHERE WE CAN ALL MOVE FREELY AGAIN.

Thank you Jörg! Warmest wishes to you and all your readers and thank you to everyone for all their amazing support!