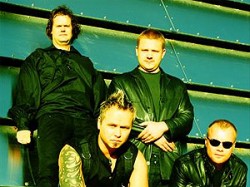 „THE ONLY SALVATION“ LAUTET DER TITEL DES AKTUELLEN ALBUMS DER NORWEGER ARTIFACT, DAS DURCH SEINEN DÜSTEREN, MELODISCHEN, TEILWEISE HARTEN, ABER IMMER MELODISCHEN ROCK ÜBERZEUGEN KANN. GERADE DURCH DIESEN FRISCHEN SOUND, WAR ICH NATÜRLICH SEHR ERFREUT, DEN KREATIVEN KÖPFEN HINTER DER BAND EIN PAAR FRAGEN STELLEN ZU DÜRFEN. WAS DIE BAND ZU IHREM ALBUM, EINFLÜSSEN UND GEPLANTEN LIVE-AKTIVITÄTEN ZU SAGEN HAT, KÖNNT IHR IN DEN FOLGENDEN ZEILEN LESEN. WHEN DID YOU START ARTIFACT AND WHAT ARE YOUR INFLUENCES? Pål: Artifact was started in 2002, but did not reach its current form until late 2004, when Tor Arne joined the band. My influences are Depeche Mode, Zeromancer, The Kovenant, Gary Numan and NIN, to mention a few. Tor Arne: My influences are Fear Factory, Mötley Crüe, Pantera, Machine Head and old Sepultura. But, I also listen to A-ha (I love Morten Harket’s voice.) Depeche Mode, I’ve also listened to Mesh, Unheilig and Combichrist lately. PLEASE DESCRIBE THE SOUND OF ARTIFACT WITH YOUR OWN WORDS. Pål: Industrial electronic metal with a touch of goth. WHAT ARE YOUR SONGS ABOUT ? Tor Arne: The songs are about betrayal, corruption, murder, drug abuse, rotten love, suicide and other nice stories. There is one about hope too 🙂 WHO IS IN THE BAND RIGHT NOW? THERE WAS A LINE-UP CHANGE, IF I’M RIGHT? Pål: We’ve had a bunch of line-up changes over the years, although the lineup has been relatively stable since Tor Arne joined. Since 2005, the only lineup changes has been Jan Henrik on bass joining in the middle of 2006, and leaving at the end of 2007, and our drummer Svein Harald who became a member in April this year. IS ARTIFACT YOUR FIRST CONTACT WITH THE MUSIC BUSINESS? Pål: I’ve been in a couple of unknown bands before Artifact. Tor Arne: Well, I’ve been in other bands like This Negative Karma (featured on 2 compilation cds) and a black/extreme metal band called Antaios (released on a split cd). But, Artifact is the first band that we got a record deal with. YOUR ALBUM HAS BEEN JUST RELEASED SOME TIME AGO. TELL US SOMETHING ABOUT THE FEEDBACK YOU’VE GOT FOR THIS CD. Tor Arne: The feedback has been very positive, and I think the cd is selling okey too. In Zillo magazine, we were newcomer of the month, and album of the month, which was great! WHERE DID YOU PRODUCE THE ALBUM? Pål: I produced it at home, in my apartment. PLEASE TELL US SOMETHING ABOUT YOUR GIG AT THE WGT. Tor Arne: Our trip to Germany was fun, a lot of beer and absinth. Playing the WGT festival was a great experience for us. I hope we can play there again, and with all of our band members. We had a friend of mine to fill inn for Bjørnar on guitar, and our new drummer didn’t have enough time to get ready for the gig. We also got to see Paradise Lost and Unheilig, they were both great. It was also fun to see some of the crazy people at the festival. ARE THERE SOME UPCOMING GIGS IN GERMANY? PERHAPS A FULL TOUR? Tor Arne: We don’t have any gigs coming up, but would love to do some shows or a full tour in Germany. Hopefully we’ll get a chance someday. WHAT DO YOU THINK ABOUT THE INTERNET AND THE MP3 PHENOMENA? Pål: I think that while it provides the opportunity for unknown and unestablished band to potentially reach millions of listeners through sites like MySpace etc, it has also gotten harder because of the enormous amount of bands using the same medium to promote their music. That being said, we got picked up ourselves by our label Spiralchords via MySpace, and we’ve also gotten some national airplay through a Norwegian site, and I think the benefits of the new technology by far outweighs the drawbacks for underground artists like us. THANK YOU VERY MUCH FOR THE INTERVIEW. THE LAST WORDS ARE YOURS. Tor Arne: Thanks for the interview, hope your readers a have chance to check us out. And hopefully we’ll see you in Germany one day.