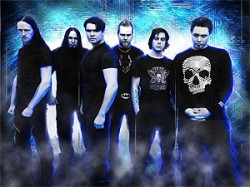 HEY, WHO ARE YOU, WHERE ARE YOU AND WHAT HAVE YOU DONE 10 MIN. AGO? Hi. My name is Stefano and I play guitars and do a little backing vocals in BLACK COMEDY. Right now I’m at home, just returned from two weeks in the hospital with a broken ancle. But besides from that everything is peachy 😉 ALTHOUGH THE BAND EXISTS FOR SEVERAL YEARS NOW, YOU ARE STILL KIND OF NEW TO THE METAL AUDIENCE. PLEASE GIVE US A SHORT INTRODUCTION. BLACK COMEDY has been given the genre „cyber-metal“ and that term quite speaks itself. Kick-ass metal with futuristic componets from the synths create a sound built up by the influences and musical inspirations of the different band members. HOW CAME THE IDEA FOR THE NAME? YOUR MUSIC ISN’T A COMEDY IN MY POINT OF VIEW 😉 I’m not quite sure about the origin of the name or who made it up, but I believe it reflects the sarcastic and self ironic lyrics as well as the futuristic metal sound we have. But you’re quite right, the music is not meant as a comedy 😉 WE RECEIVED YOUR FIRST EP “SYNTHESIS” ABOUT 5 YEARS AGO. HOW DID THE BAND DEVELOP ‘TILLINSTIGATOR” AND HOW MUCH OF “SYNTHESIS” DO WE HEAR ON “INSTIGATOR? The band has evolved a lot since ”Synthesis”. Three new band members have joined along the way (including myself), and I can’t speak for the whole band but I try contribute a lot to the band by writing a lot of new riffs and songs. Additionally, Marius‘ studio has grown drastically in recent years and he has become a much better producer so the sound has proven to be a lot better today. Besides from the two songs we have brought with us from ”Synthesis” to this album I don’t believe there is very much of ”Synthesis” we hear in ”Instigator”. I think the sound has changed to be more agressive yet more melodic and extreme. IN OUR REVIEWS YOUR SOUND IS COMPARED WITH DANISH TECH METAL-HEROES LIKE MNEMIC AND RAUNCHY. BUT THESE BANDS WEREN’T THAT WELL KNOWN WHEN YOU FORMED THE BAND, SO WHAT ARE YOUR MAIN INFLUENCES MUSICALLY? My main influences are bands like MESHUGGAH, FEAR FACTORY, STRAPPING YOUNG LAD, SOILWORK, DILLINGER ESCAPE PLAN and FAITH NO MORE to mention a few. IN THE LABEL-INFO THE LYRICS ARE DESCRIBED AS TALKING ABOUT PERSONAL THINGS, POLITICS, RELIGION AS WELL AS BEEING SARCASTIC AND SELF-IRONIC. PLEASE EXPLAIN IT IN YOUR OWN WORDS. I think your interpretation of the lyrics are quite correct. This would be a better question to ask Jon who actually writes the lyrics but I believe he tries to make an appeal to the people to make them see how cruel and ignorant the world can be. MY FAVES ARE “FAVOURITE HATEOBJECT”, “SUM OF ALL SHIT”, “LORD OF LOCUST” AND ESPECIALLY “STORY OF THE GOD…”, CAUSE THEY’RE PROOVING YOUR DIVERSITY BEST. WHAT ARE YOU FAVES AND IS THERE KIND OF A LEAD-TRACK ON THAT ALBUM? My absolute favourites are ”Lord of Locust” and ”Civil Paranoia” because these songs actually gives me the creeps when I play them. But I think ”Favourite Hateobject” is meant to be the lead track of the album with the very catchy chorus parts. HOW ARE THE REACTIONS, NOW THE ALBUM IS OUT IN EUROPE AND AS WELL IN THE US? Well, we have gotten some reviews from around europe by now and I must say I am overwhelmed with the result. I never expected the reviews to be so good so I am very satisfied. HOW IMPORTANT ARE “VETERANS” AS TJOLDALV AND MEMNOCK FOR THE DEVELOPMENT OF A YOUNG BAND? AND HOW ANNOYING CAN IT BE WHEN YOUR ARE ADVERTISED AS A BAND WITH FORMER MEMBERS OF DIMMU BORGIR AND OLD MAN’S CHILD? Both of them are good musicians and contribute to make BLACK COMEDY a better band. I don’t think its annoying to be advertised that way. On the contrary, I believe we’ll sell a lot more records this way. But if the buyers think they get something similar to DIMMU BORGIR or OLD MAN’S CHILD they’ll get a surprise 😉 but a good one I hope. IN MY REVIEW I PREDICTED POSSIBLE OFFERS OF BIGGERS LABELS. WOULD YOU TAKE THIS STEP OR WOULD YOU THINK ITS BETTER TO GROW NOT TO FAST? We are at the moment very pleased with our current label. I think moving to a bigger label at this point would be a problem for a not so well known band like BLACK COMEDY. By this I mean that maybe we will not be a priority to the label and with big well known bands by our side it’s easy to be forgotten. THE FESTIVAL SEASON IS COMING SO YOU’RE FOR SURE PREPARING FOR THE LIVE ACTION? WHAT ARE YOUR PLANS FOR LIVE ACTIVITIES? Well, first of all I hope my ancle will be strong enough for the festival season but we hope to play some gigs this summer. I’ve had a dream all my life to do a tour with a band and now I it looks like a tour might happen in not very long time… MY FAVOURITE LAST QUESTION: IF YOU WOULD HAVE THE FREE CHOICE FOR WORKING/PERFORMING/MEETING UP WITH ANY MUSICIAN/ ARTIST (DEAD OR ALIVE)… WHO WOULD IT BE? Wow, that is a tough one. After thinking about it for about an hour I’ve decided to go with Mike Patton. He’s the definition of vocal diversity and I think it would be a very cool experience to have worked with Mike. THANK YOU FOR YOUR TIME AND GOOD LUCK WITH YOUR STRONG RECORD! Thank you!