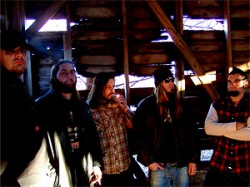 HOW ARE YOU AND HOW DO YOU LIKE YOUR NEW HOME OKLAHOMA? ARE THERE HUGE DIFFERENCES COMPARED TO O.C.? We are really enjoying it. The biggest difference would have to be the cost of living. Also a couple members of the band are from the area so it was not difficult to get acclamated back. IF YOU WATCH THE SUCCESSFUL TV-SERIE „O.C.; CALIFORNIA“, DO YOU GET A REALISTIC IMPRESSION IN YOUR OPINION? To be honest, I dont catch much T.V. especailly reality T.V. so I guess there is no answer to this one. LET’S TALK ABOUT YOUR NEW ALBUM „MURDER THE DANCE“. FIRST OF ALL: CONGATULATIONS! IT HAS BEEN THREE YEARS SINCE „PARADIGM IN ENTROPY“, HOW MUCH OF THAT TIME DID YOU PUT IN THE WORKING PROCESS? We couldn’t be happier with the way the album came out. About a year to a year and a half took up the new album process. It took alot longer due to setbacks in areas of the process. IF YOU HAD TO DESCRIBE IT IN YOUR OWN WORDS: HOW DOES „MURDER THE DANCE“ SOUND? It definitely has a dark, dirty and heavier sound. „MURDER THE DANCE“ – MY INTERPRETATION OF THIS TITLE IS, THAT YOU ARE NOT SOME „FULLBLOODED-DANCINGQUEENS“, OR ARE THE APPEARANCES DECEPTIVE? 😉 Fortunately they are not deceptive. It basically says „Fuck all the bullshit“ everyone has some sort of situation or circumstance they have to deal with on a daily basis and „murder the dance“ to us means to stay strong to what you believe and move forward. THERE HAVE BEEN SOME PERSONAL TURNOVERS. WHAT ARE THE REASONS BEHIND THAT? CHANGE OF SOUND – CHANGE OF LINE UP? OR THE OTHER WAY ROUND? Some former members were not able to continue on with BTS. We are on good terms with everyone, but due to either illness or other obligations, They could not keep going. However we could not be happier with the way the line up ended up. FROM 6 TO 5 – WAS IT A WITTINGLY STEP TO ABSTAIN FROM A MAN FOR THE SAMPLES OR A NATURAL FLOW? When the material was coming out it was a natural flow and the samples we feel were no longer needed. NEW PEOPLE, NEW INFLUNCES: ON WHICH WAY SHAPED THE NEW MEMBERS THE APPEARANCE OF „MURDER THE DANCE“? Everything that you hear and see is just the way we are. The appearance of the band fits the sound. YOU WORKED TOGETHER WITH JEREMY HALL OF „AUDKIK“. WHY HIM AND WHICH CREATIV INPUT COULD HE GIVE? We have actually wanted to work with jeremy for years. He brought a perfect take to what were wanting on „Sleeping Beauty“. IS THERE SOME KIND OF EVOLUTION REGARDING YOUR PREVIOUS WORKS? IN WHICH ASPECTS DO YOU SEE PROGRESSION ESPECIALLY? Honestly the way it sounds was a natural thing. We feel it is evolution. We were not trying to make it sound a certain way, we got together and just jammed it out and here we are. THERE HAS BEEN A VIDEO FOR „MINION“. WHICH SONG OF „MURDER THE DANCE“ DESERVES A VIDEO AS WELL, IF YOU WOULD HAVE TO CHOOSE? AND: WHAT WILL/ WOULD IT BE LIKE? Actually we finished shooting the video for „Sulivan“ just a few weeks ago. I would tell you what its like but I’d rather you wait and find out. ARE YOU SATISFIED WITH YOUR WORK OR IS THERE SOMETHING YOU WOULD LIKE TO CHANGE BY HINDSIGHT? Every musician has something in their work they would do different. However that is one of the best parts because when you play it on stage you can express other intentions at will. YOU ARE IN THE TOP 50 OF THE BEST US-BANDS IN THE „SPIN-MAGAZINE“. IN WHAT WAY ARE YOU HAPPY ABOUT THAT RESULT AND WHO WOUD BE IN YOUR PERSONAL TOP 5? We are stoked about the spin magazine feature. There are too many bands to name the top 5 for the list though. BLEED THE SKY IS OFTEN COMPARED TO CHIMAIRA. ANY RESEMBLANCES ABOUT THAT? DO YOU CARE ANYWAY? We have heard that every once in a while, but we have a great deal of respect for those guys. So its more of a compliment than anything else. AS A PERSON WHO IS INTO THE MUSIC BUSINESS MOST OF THE DAY: WHICH BANDS DO YOU PREFER PERSONALLY? Good music is good music. Right now we are all stuck on A LIFE ONCE LOST, HE IS LEGEND, again there are so many bands to name…. ON YOUR FIRST GIG YOU SUPPORTED A BIG ONE: OPETH. FOR WHICH BAND/ S WOULD YOU OPEN A SHOW IF YOU HAD FREE CHOICE? MESHUGGAH, A LIFE ONCE LOST DO WE HAVE TO WAIT THREE YEARS AGAIN UNTIL THE NEXT ALBUM? It’s definitely not our intention. we would like to tour on MTD for a while and see how it goes. GERMANY AND MOST OF EUROPE ARE UNDER THE SPELL OF THE EUROPEAN-SOCCER-CHAMPIONSHIPS. DO YOU NOTICE THIS EVENT IN THE USA? ARE YOU A SOCCER-FAN YOURSELF? IN WHICH SPORTS ARE YOU INTO ANYWAY? As for us, we do not follow soccer at all really. Baseball and Football. IS THERE SOMETHING YOU WANT TO SAY, MAYBE ESPECIALLY TO YOUR GERMAN FANS? CANT WAIT TO SEE YOU ALL ON TOUR!!!!!!! THANK YOU VERY MUCH FOR ANSWERING THIS QUESTIONS AND HAVE A GOOD TIME!