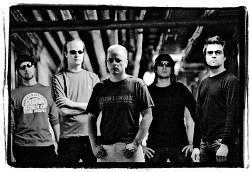 GAV UND RON VON CALLENISH CIRCLE ÜBER DIE STÜCKE IHRER NEUEN SCHEIBE [PITCH.BLACK.EFFECTS] IM O-TON. 1. This Day You Regret The intro starting off with Morse code and a threatening pounding sound introduces the opener of the album. We chose this song because you immediately hear it’s Callenish Circle playing, but using some different kinds of riffs, you also hear our sound slightly changed compared to our former 2 albums. Furthermore you can hear the variation in the vocals (growls, screams, whispers and everything in-between) and the innovative vocal lines. This Day You Regret sets the tone for the rest of the album and of course the song’s title is very appropriate for those who are listening to the album for the first time! 2. Ignorant Maybe some fans of our former albums will lift their eyebrows for a moment when Ignorant kicks in with a heavy bass/synth combo, which shows CC has indeed found a new sound. This is a song which shows we added some fresh ingredients to our already recognizable music style. The catchy verse completes the balance between the groovy and aggressive parts. 3. Behind Lines Without any digital sounds or breaking speed records, though pretty fast paced, Behind Lines manages to become one of the most heavy songs in our repertoire. This cyclone contains some really catchy hooks and verses. Can I hear a sigh of relieve of our long-time fans? Well, wait for the next one then… 4. Schwarzes Licht Our most experimental song until now. Here our producer Gail Liebling could do his thing! The first song we ever did what’s mainly carried by synths and drum loops. In this song all other instruments have a more or less supporting role. Actually, that’s how it turned out as we handed over the guitar and drum patterns to Gail to be used as the basis of the song. The middle of ‘Schwarzes Licht’ is really dark and atmospheric. Gail’s wife Kaleen is responsible for the German and English spoken female vocals in here. 5. Sweet Cyanide This was the first song we wrote for PBE. Perhaps that’s the reason why this one is quite in the same vein of our previous 2 albums: heavy, melodic, aggressive and overall seen it breathes kind of a similar atmosphere. Yet we have a few surprises in here. Again some cool grooves combined with some digital soundscapes in the choruses. 6. Blind Again a song that differs quite a lot from the other tracks on PBE, but with some typical CC elements. Blind includes some insolent and heavy mid-tempo riffing combined with Pat’s deep grunt. The middle parts include some eastern sounding melodies. The end part concludes being really wacky with distorted vocal screams (let it all go!) and some feed backing of the microphone used for the vocals (The studio-guy must have been really happy with Pat when he was feed backing his very expensive Neumann microphone) as an omen for the next one to come. 7. Guess Again When entering the studio this song was hardly finished and the vocal lines still had to be made. It already contained some cool contrasts like the opening blast beat followed by the staccato rhythm and the chorus with the conflicting drums vs. guitars. After hearing the vocals for the first time I was very impressed by the total impact of the song. Pat and Gail came up with some superb catchy vocal lines, which made Guess Again one of the biggest surprises of PBE. 8. Self-Inflicted A mid-paced song containing some melancholic melodies you can’t get out of your head anymore. Sometimes you even hear what CC was doing like 10 years ago. Did I hear someone say Callenish Circle lost their roots? 9. As You Speak This is also one of the first songs we wrote for this album. It’s Thrashy and aggressive and also pretty much in the vein of our latest 2 albums, but again with some new elements. Kaleen shows she can be pretty mean in the middle part, creating a dark and oppressing atmosphere. Some original digital effects put the icing on the cake and make this one a real cocktail of typical CC ingredients with some fresh sounds. 10. Pitch black To conclude the album, we wanted to create an instrumental part to cool you down after listening the 9 intense songs. We intended to express the meaning behind the album title in this one. It took some experimenting in the studio, but I think we definitely succeeded in this purpose. Ending the album with Morse code (yes, it’s real Morse and they have a meaning!), the circle is complete…

Thanx for listening… hope you enjoyed it as much as we did!