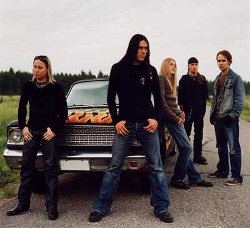 CONGRATULATIONS, ANOTHER EXCELLENT OUTPUT FROM CHARON. HOW ARE YOU GUYS? EVERYHTING O.K. IN FINLAND? Thanks for asking, everything´s fine. “Enjoying” the autumn at the moment… FIRST OF ALL MAYBE A DULL QUESTION: WHAT DOES THE NAME “CHARON” MEAN? I NEVER FOUND OUT. I DO NOT THINK YOU LIKE THE ISRAELI PRIME MINISTER SO MUCH 🙂 Haha=) the name comes from the greek mythology…even though Ariel Sharon has done some great promotion for us… J-P IS A VERY OUTSTANDING ARTIST WHOSE VOICE IS TO BE RECOGNIZED AT ONCE. HAS HE SOME KIND OF A CLASSICAL EDUCATION? Nope, everything I´ve learned, I´ve learned through gigs/studio sessions. AND I FOUND SOME INFORMATION IN THE NET ABOUT A “TEEMU HAUTAMÄKI” WHO IS INTO PROFESSIONAL BOWLING. I BELIEVE THIS ISN’T “YOUR” TEEMU? Well that would be cool but unfortunately you got the wrong person… “THE DYING DAYLIGHTS” IS A NICE REFERENCE TO THE WELL-KNOWN JAMES BOND-MOVIE. I SUPPOSE YOU DID THIS ON PURPOSE?! DO YOU LIKE JAMES BOND MOVIES ANYWAY? OR ARE YOU MORE INTO DARKER MOVIE GENRES? Our drummer likes… a lot! Strange… Everything goes from comedy to splatter as long as it´s quality on its way. THE COVER IS VERY IMPRESSING, TOO. A FINE BLEND BETWEEN THE UNIQUE AND THE MYSTIQUE. WHO HAS DESIGNED IT? British designer called Travis Smith who designs also Katatonia, Opeth etc. covers… YOU DID NOT CHANGE YOUR BASIC MUSICAL DIRECTION WHICH WAS TO BE EXPECTED BUT WHERE DO YOU SEE THE MOST SIGNIFICANT DIFFERENCES BETWEEN “DOWNHEARTED” AND YOUR NEW OUTPUT? My opinion is that there´s more basic rock elements on “TDD” when downhearted is simply an metal album. The lyrical side of “TDD” is more different than on all the previous albums. SOMEHOW I BELIEVE THAT YOU ARE ON SEARCH FOR THE PERFECT REFRAIN. HOW CLOSE ARE YOU? DO YOU BUILD YOUR SONGS AROUND THE REFRAIN? I don´t know how close we are but sometimes when it feels like you got the best refrain you could think of somebody says that it´s crap, that drives us try harder and yes, songs build a lot to the refrain even though we have to think how it´s going to sound together with other parts. DO YOU THINK YOU WILL INTEGRATE SOME NEW INFLUENCES IN THE FUTURE LIKE ELECTRONICS? I BELIEVE THE DARK METAL GENRE IS SOMEHOW A BIT LIMITATED AND THERE IS THE DANGER OF REPEATING ONESELF. True. Hard to say at this point what the next album will be, it´s always a surprise even for ourselves! “EVERY FAILURE” IS ONE OF MY FAVOURITE TRACKS AS IT CONTAINS A DIFFERENT STRUCTURE FROM YOUR NORMAL SONGS. ANY COMMENTS ON THAT SONG? At first it was a tryout in the sense of “can you make it this way?” but then it started to sound quite cool and we changed the basic idea we had first. We didn´t want to make it sound like the other songs… YOUR MUSIC – ALTHOUGH VERY MELODIC – IS STILL “METAL”. HOW IMPORTANT IS THIS FACT FOR YOU? ESPECIALLY CONSIDERING SOME COUNTRY MATES WHO HAVE BECOME “POP”? It´s very important of course and we didn´t want to go more into the pop direction as we were possible going on with “Downhearted” so we took a few steps back to stay where we want to stay…

AND EXPLORING THIS FACT DEEPER. YOU HAVE BEEN COMPARED TO H.I.M. VERY OFTEN BY PEOPLE WHO DO NOT SEEM TO UNDERSTAND YOUR MUSIC. IS THIS VERY ANNOYING? DO YOU LIKE H.I.M. ANYWAY? H.I.M. is a great band anyway but when comparing us to them starts to get “bit” frustrating when we have totally different principals to do music…and it´s not the money. YOU HAVE BEEN VERY SUCCESSFUL IN YOUR HOME COUNTRY. HOW MUCH DOES THIS MEAN TO YOU, SINGLE CHARTS AND ALL THAT STUFF? HOW CAN IT BE THAT YOUR COUNTRY HAS SUCH A PLEASANT MUSICAL TASTE? Of course it means a lot cause in the beginning we didn´t expect anything like this coming out of this, so everything that comes is very welcome and I appreciate it. I don´t know how Finnish people can be so supportive for the metal music but at least I know that they are loyal to you and in this genre it´s very common that you actually buy the album instead of getting it from the net. Then it´s on the charts and gets the support it deserves! IN GERMANY I WOULD SAY YOU ARE STILL UNDERDOGS BUT ON THE VERGE OF GETTING “BIG”. ANY SPECIAL TACTICS HOW TO CONQUER THE GERMAN HEARTS? IS THIS MARKET VERY IMPORTANT FOR YOU? German markets are always important to a band like us! We do not have any special plans to conquer it but I hope that our label has… touring the Germany is important as well. DO YOU HAVE ANY CONTACT TO THE GERMAN CHARON FANPAGE (WWW.CHARON.BE.TC/ )? Few mails have been written. It´s great to see that we got few fanpages around the Europe and one in the U.S.A. big thanks to them!!! YOU HAVE BEEN ON TOUR WITH NIGHTWISH. I SUPPOSE IT HAS BEEN AN INTERESTING EXPERIENCE. ANY FUNNY TOUR STORIES, ANY CATATROPHES? YOU SEEM TO HAVE BECOME FRIENDS, AS YOU INVITED MARCO HIETALA FOR THE BACKING VOCALS. Yep, we spent a lot of time with Marco and Tuomas during that tour and I must say that they´re bunch of a great characters – everyone of them. I could tell one catastrophe among the others that happened to us in Barcelona. The temperature was really hot on the stage (about 60celsius) and drinking beer wasn´t the best way to keep de-hydration away. So after our gig Pasi did fell face down to the backstage sofa (with pale grey skin) and right after that he was taken with an ambulance to the hospital cause he did have sunstroke plus de-hydration going on. Well, he did escape from there after lying one hour on the hospital corridor and the party could continue… AND WHEN WILL WE SEE YOU ON TOUR IN CENTRAL EUROPE? WHAT CAN WE EXPECT? At the beginning of 2004. You can hope the best and fear for the worst! THANK YOU VERY MUCH AND GOOD LUCK WITH “THE DYING DAYLIGHTS” Thank you!!