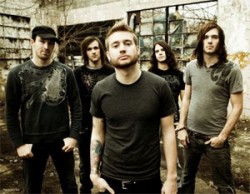 WHO ARE YOU? HOW ARE YOU? WHERE ARE YOU AND WHAT HAVE YOU DONE 15 MIN. AGO? I am Jason, I am in washington state, and I just got woken up to do this interview, ha YOU DID NOT REALLY TAKE A BREAK AFTER YOUR MASSIVE TOURINGS LAST YEAR. DO YOU USE THE POWER AND ENERGY YOU GET FROM LIVE-SHOWS AS INSPIRATION FOR NEW TRACKS? Well, playing live gives us a good indication of what pumps kids up, so we try to keep those elements fresh in the writing process. WHICH ARE THE REASONS YOUR NEW OUTPUT BEING YOUR BEST EFFORT SO FAR? OR MAYBE YOU EVEN WOULD LIKE TO ADMIT THAT IT IS NOT? Oh, it is by far the best record we have done! I attribute that to having more time to write this time, naturally growing as musicians and songwriters, and the fact that Stephen brought not only a huge range in vocal abilities but also contributed to some of the music writing. “PRESSURE THE HINGES” SOUNDS MUCH MORE MOTIVATED THAN YOUR OTHER RECORDS. HOW IMPORTANT IS THE NEW MAN AT THE MIC FOR THIS? Well like I said before, he has great range. He has an amazing scream, and a killer singing voice. He also has creative musical ideas. HOW DID THE FANS REACT ON THIS UNEXPECTED CHANGE IN THE LINE UP? AND HOW DID YOU GUYS FEEL YOURSELF? Well, our true fans are the best fans in the world and they stood by us. There were some trash talkers, but most people love Stephen and recognize that we sound the best we ever have. We are still best friends with Jimmy, but obviously had to move on after he quit. What do they expect us to do? ha. PLEASE TELL US MORE ABOUT THE LYRICS. IS THERE A KIND OF “MAIN TOPIC” THAT GOES THROUGH THE HOLE ALBUM? The theme of the lyrics is what made us decide on „pressure the hinges“. I am just the guitarist, but from what i have gathered, all of the songs wound up representing different kinds of pressure in life. Like in „stitches“ when you have a loved one falling apart and want to say something, but dont. YOUR LABEL POINTED OUT THAT “STITCHES” IS KIND OF A LEADING TRACK. FOR MYSELF IT’S “WHITE COLLAR”. IS THERE A LEADING TRACK AND WHAT’S YOUR PERSONAL FAVE? The cool thing about this album is that I love every track. “Janet’s Planet”, “Stitches”, and “Chorus of Angels” are probably the biggest step outside the norm for us. WHAT OR WHO WAS YOUR BIGGEST INFLUENCE AS AN ARTIST IN GENERAL? DO YOU SEE YOURSELF AS PART OF A CERTAIN TRADITION OR AS PART OF A MOVEMENT? My biggest musical influences are Stevie Ray Vaughan, Slash, Jimmy Page, Angus Young, Phil collen, Steve Clark, Scottie Hill, Dave Sabo, Kurt Cobain, Billy Corgan. I see my self and my band as artists trying to make honest music in the most creative way we know how I suppose. WHAT DO YOU THINK ABOUT TO BE CALLED AN “EMO”-BAND? THIS WORD IS OFTEN USED AS AN INSULT NOWADAYS…. Well, we are not emo. We are heavy, and our vocals and harmonies are solid, not whiney, and we don’t write songs about girls or wear girl clothes. We are not sassy, we realize that we are men, and we act like it. OF COURSE, WE WANT TO KNOW MORE ABOUT YOUR TOURING-PLANS. ANY FESTIVAL APPEARANCES? OR ALREADY A PLANNED CLUB-TOUR FOR EUROPE/ GERMANY? I would love to make it back to Europe by the end of the year, and we do have Warped Tour coming up (the first month). WHICH ARE YOUR OTHER TALENTS & INTERESTS BESIDES PLAYING MUSIC? I love lifting weights and watching the Colts win the Super Bowl, haha. WHAT ARE YOUR PLANS IN THE NEAR AND FAR FUTURE ON A PERSONAL RESPECTIVELY ARTISTICAL LEVEL? I plan on pursuing music as long as the Lord lets me. It is my passion. Right now, HASTE THE DAY is in full stride, and we are letting up anytime soon. DO YOU FEEL AN ARTIST HAS A CERTAIN DUTY TOWARDS ANYONE BUT HIMSELF? OR TO PUT IT DIFFERENTLY: SHOULD ART HAVE A POLITICAL/ SOCIAL OR ANY OTHER ASPECT APART FROM A PERSONAL SENSATION? Well as much as an artist needs to keep his music honest and true to his/ herself, you also in many ways have an obligation to your fans. They are the reason any artist is able to continue. IMAGINE YOUR MUSIC HAS BEEN CHOSEN AS A SOUNDTRACK. WHICH FILM WOULD IT FIT BEST? Ha, I have no idea. I would like to think one of the Rocky movies. YOU ARE ASKED TO EQUIP A SPACE-SAGGAR, WHICH DEMONSTRATE THE MENS CULTURAL HERITAGE – WHICH 3 ALBUMS MIGHT NOT BE MISSED? AC/DC – “Back in Black”, DEF LEPPARD – “Hysteria”, LED ZEPPELIN – “1” JUST IN CASE YOU WOULD HAVE FREE CHOICE: IS THERE A BAND/ ARTIST; DEAD OR ALIVE, (REGARDLESS OF GENRE) YOU WOULD LIKE TO PERFORM WITH LIVE? Slash. CONSIDERING YOURSELF BEING A FESTIVAL DIRECTOR. WHICH ACTS WOULD YOU LIKE TO INVITE TO PLAY ON “YOUR” STAGE? Pretty much the bands I have mentioned. THE WORLD WIDE WEB: CURSE OR BLESSING FOR INDEPENDENT MUSIC? Mainly blessing, but certainly some hints of curse, ha AT LAST: FEEL FREE TO ADRESS YOUR SUPPORTERS/ ENEMIES DIRECTLY IN YOUR OWN WORDS! We love our fans, and “Pressure the Hinges” is the best record we have done to date! THANK YOU VERY MUCH FOR SHARING YOUR TIME AND GOOD LUCK WITH YOUR INTERESTING RELEASE!