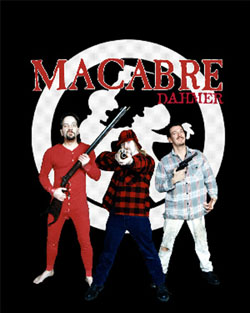 YOU RETURN WITH YOUR SOLID “MURDER METAL” RELEASE – NICE TITLE, DO YOU THINK YOU WILL DEFINE A WHOLE NEW GENRE? I think we already have, people have been calling our music that for years, lyrically we sing only about killers from around the world, but as you heard, musically we are free to experiment and do whatever we want. AFTER 18 YEARS TOGETHER WITHOUT A SINGLE LINE UP CHANGE. WHAT IS THE SECRET OF THE CHEMISTRY IN YOUR BAND? No secret here, it’s like I say all the time „We have nothing better to do!”, if we did, we wouldn’t be doing this!. THE COVER OF “MURDER METAL” IS VERY ENTERTAINING, LOOKS LIKE A TRAFFIC SIGN TO ME. ANY IDEA IN WHICH STREET IT SHOULD BE POSITIONED? “Evil Strasse“ and it means danger ahead. YOU`VE GOT A VERY EXPERIENCED PRODUCER (NEIL KERNON). HOW IMPORTANT IS THE SOUND QUALITY FOR YOUR SPECIAL KIND OF METAL? I like a good quality recording, for what we do, you need one to make eveything stand out, I don’t want a muddy recording. Plus an album is forever and in 20 years I can listen to to it and say that it sounds good, and be proud of it. HOW DID YOU GET IN CONTACT WITH THE FRENCH LABEL SEASON OF MIST? ARE YOU CONTENT WITH THEIR WORK? They contacted us and made us an offer, which was the best one out of the bunch, as for how good they are, that still remains to be seen, ask me in a year. WHERE DO YOU GET ALL YOUR MASS MURDERER IDEAS FROM? ANY PROBLEMS OF FINDING NEW SERIAL KILLERS? HAVE YOU GOT A LARGE COLLECTION OF BOOKS ON THIS THEME? WHICH KILLER DO YOU LIKE BEST? We get most info from books and newspapers, we have hundreds of books and clippings about this subject, we also have a lot of videos of documentaries and such. some people send us info too, which goes into the archives . We will never run out of killers to write about, they catch people around the world all the time and there are plenty that have never been caught and still so many that we haven’t written about. ESPECIALLY THE “WEREWOLF OF BEDBURG” IS UNKNOWN TO ME. CAN YOU TELL ME THE STORY? Well, he’s part of your history, I guess you could say he is a legend in Germany. He’s a man from the fifteen hundreds who thought he was a wolf and murdered people, didn’t you learn this in school? (offensichtlich nicht, der Interviewer) THE SONG “FRITZ HAARMANN…” IS SUNG IN GERMAN LANGUAGE. ARE YOU ABLE TO SPEAK GERMAN OR HAVE YOU JUST READ IT FROM PAPER? We really can’t speak german, I understand it better than I can speak it, but I’m picking up a little more each time I visit Germany ONE SERIOUS QUESTION: HAS SEPTEMBER, 11TH IN ANY WAY CHANGED YOUR ATTITUDE TOWARDS SONGWRITING AND YOUR SARDONIC AND VIOLENT TEXTS? No it hasn’t, and why should it? WHAT DO YOU THINK OF THE BUSH ADMINISTRATION AND POLITICS? HAVE YOU HAD ANY PROBLEMS WITH THE NEW “BIG BROTHER” FEELING IN THE STATES OR CENSORSHIP MEASURES? COULD YOU IMAGINE TO WRITE SONGS ABOUT BUSH, BIN LADEN ODER SADDAM? The climate here is very scary to me, but most Americans are too stupid to know that. Everyone is more preoccupied with cell phones and driving suv’s, to really pay attention to what’s going on around the world, let alone our goverment. But I better stop, because they may be watching and listening. I ALSO LIKED THE CLEAN VOCALS IN “YOU`RE DYING TO BE WITH ME”. DON`T YOU THINK YOU SHOULD USE THIS MEANS OF STYLE MORE OFTEN? Pehaps we may do more of this in the future. We have a lot of ideas for different sounds and vocal styles, during live shows we sometimes use eerie effects in between songs, like a couple of the songs on Murder Metal. Glad you like the new stuff. DO YOU ALSO LIKE MOVIES SUCH AS “DAHMER” OR LARGER PRODUCTIONS LIKE “SEVEN”? WHICH ARE YOUR FAVOURITE ONES? AFTER ALL YOUR EXPERIENCES YOU SHOULD BE ABLE TO WRITE SCRIPTS FOR THRILLERS… I guess some of them are good, but I’m not the movie guy. Corporate Death watches more movies than I do. I like to watch of non fiction documentaries. CAN WE IN GERMANY EXPECT TO SEE YOU ON TOUR SOON? ANY NEW IDEAS FOR THE SHOW? We’ll be on tour in January 2004 and we may have some suprises for you. We always have special merchandise to sell that isn’t on www.murdermetal.com. As you can see by the songs on the new album, we really like Germany, we have many friends there that we’ve met over the years. The inside artwork collage in Murder Metal of all the differentkillers is done by our friend lobo in Germany as well, you have good beer too. ANY LAST WORDS? Don’t be afraid of exploring music and beware of generic music, there is too much good stuff out there to listen to, both new and classic. Take Care. THANX AND GOOD LUCK WITH YOUR “MURDER METAL”!