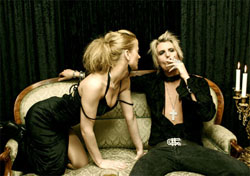 MALICE IN WONDERLAND – A “NEW” DARK/ GLAM ROCK BAND OUT OF NORWAY, SINGER CHRI$ OBVIOUSLY LIKES POSING MUCH MORE THAN TALKING BUT SOMETIMES YOU CAN ALSO LEARN FROM THINGS WHICH HAVE NOT BEEN SAID… HI CHRIS, HOW ARE YOU? Hello, I’m doing fine thanks! YOUR SELF TITLED DEBUT ALBUM IS JUST OUT NOW IN GERMANY SO WOULD YOU PLEASE INTRODUCE YOURSELF TO OUR READERS? MALICE IN WONDERLAND is a dark/ glam rock band from Norway. We released our self titled debut last year, and it’s now out in Germany. We have been around since ’97, but with many different line ups. I used o be the synth player, but in ’01 I took over the vocals. ALL MEMBERS OF THE BAND HAVE FUNNY PSEUDONYMS – DO YOU USE THEM EITHER IN A PRIVATE ATMOSPHERE? Funny!? Oh well, he, he. Yes, that’s our names so that’s what we call each other. Chris, Andy, Tracy and Tommi ain’t that funny I think, but who am I to tell you what’s funny or not… (SO, WE BELIEVE THAT CHRI$ WICKED, ANDY VALENTINE, TRACY LOVELESS AND TOMMI GUN ARE NAMES MEANT TO BE FUNNY, BUT MAYBE THEY HAD INVENTIVE PARENTS…) YOUR NAME IS WRITTEN WITH A DOLLAR-TYPE INSTEAD OF THE “S”. MAYBE IN A FEW YEARS YOU BECOME A MILLIONAIRE WITH YOUR MUSIC – WHAT WOULD YOU LIKE TO SPEND THE MONEY FOR? My rent would be nice, and all the usual rock n’ roll bullshit of course. AND WHAT IS THE MOST IMPORTANT THING YOU CAN’T BUY WITH MONEY? Everything can be bought for money. YOU HAVE A WEAKNESS FOR FANCY OUTFITS, JEWELS AND MAKE-UP, WHICH REMINDS ME TO THE GUYS FROM NEGATIVE. THE COVER OF YOUR ALBUM LOOKS LIKE “RAZORBLADE ROMANCE” OF HIM. WOULD YOU LIKE TO BE MENTIONED IN THE SAME MANNER? It doesn’t matter who we gets compared to really, I don’t care. We have been around for ages and we are – of course – not inspired by those bands, but they may have some of the same influences as we have. I’ve noticed that we have a lot of the same fan base as them and that’s cool. (only the difference, that they have a lot more (fans) he, he)). DID YOU EVER MEET THEM? No. YOUR MUSIC IS A MIXTURE OF GLAM-, BOMBAST- AND GOTHIC-ROCK. WHO OR WHAT INSPIRES YOU MOST? On one hand we’re indeed influenced by British 80’s dark rock acts like SISTERS OF MERCY, THE CULT and THE MISSION. On the other hand we’re inspired by the L.A. glam scene in the 80’s with band as CINDERELLA, MOTLEY CRUE, and LA GUNS etc. Other bands that may have influenced us are 90’s bands like PARADISE LOST, ANATHEMA, AMORPHIS and TIAMAT. WHAT KIND OF MUSIC DID YOU LIKE TEN YEARS AGO? Pretty much the same music as I like now, the only difference is that I was a bit more into Black Metal 10 years ago. I still listen to it though, but not as much as back then. AND WHAT IS YOUR FAVOURITE AT THE MOMENT? Well, the LA scene of the 80’s is still my favourite, but I listen to a lot of different music. Pop, rock, goth, metal. If it’s good it’s good. DO THE REACTIONS TO THE ALBUM COME UP TO YOUR EXPECTATIONS? Yes! We have got a lot of great critics for the album and most people seem to love it, so that’s cool. And the fans are really exited as well and that is – of course – the most important thing for us.

YOUR SONGS ARE ABOUT GIRLS, SIN, DECADENCE, LOVE, LOSS, LONGING, DARKNESS AND MISANTHROPY, LOTS OF INTERESTING THINGS. BUT READING OTHER INTERVIEWS I NOTICE, THAT YOU DON’T LIKE TO TALK ABOUT THE LYRICS, SO IT IS UP TO ONESELF TO MAKE AN OWN INTERPRETATION? That’s true. If people make up their own mind, I think the songs will be more personal for the listener, and that’s a good thing. SO MAYBE WE CAN DISCUSS THE LYRICS ON ONE OF THE FAN-WEBSIDES THAT OPENS IN SEVERAL EUROPEAN COUNTRIES. I GUESS, THAT’S A VERY FLATTERING KIND OF SUPPORT…? Yeah, of course, it’s flattering that people make the effort to support us in such a way. We really appreciate that! RECORDING AND MIXING THE ALBUM TOOK QUITE A LONG TIME AND YOU HAVE SOME LINE-UP-CHANGES TO NOTE. SO HOPEFULLY YOU ARE NOW HOT AND IMPATIENT TO PERFORM LIVE AS A QUARTET. ARE THERE PLANS FOR TOURING IN GERMANY? Yes, the plan is to tour there during this year. Nothing is booked yet, but hopefully we will be able to come over during the autumn. DO YOU HAVE A SPECIAL RITUAL BEFORE GOING ON STAGE? Just relaxing, drink a few beers, put some hairspray in my hair and I’m ready to go. And I always brush my teeth before entering the stage. WHO WOULD BE YOUR FAVOURITE FEMALE DUET PARTNER AND WHY? I really don’t know. Any suggestions? (VILLE VALO?) DO YOU STILL HAVE A CUDDLY TOY- OR MAYBE GIRLS-PANTIES-COLLECTION? Yes, I do. CHRIS, THANK YOU VERY MUCH FOR ANSWERING THIS QUESTIONS, BEST WISHES AND LOT OF SUCCESS TO ALL MEMBERS OF MALICE IN WONDERLAND!