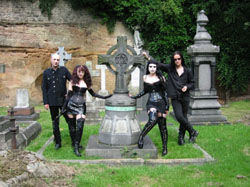 2003 SAW THE LIGHT OF THE FIFTH STUDIO ALBUM OF BRITISH GOTH INSTITUTION MIDNIGHT CONFIGURATION ENTITLED „SEPULCHRE ROSE“. HI! HOW ARE YOU? WHERE ARE YOU? I am fine and looking at my computer screen which like me is situated 14 miles from Nottingham and 2 miles from the Grave of Lord Byron. TODAY IS HALLOWEEN – ANY SPECIAL PLANS FOR THE „DAY OF THE DEAD“? It’s now been and gone I am afraid (bloody internet). I went to a Gothic Wedding actually which included a „Ghost Walk“ which was a laugh! HOW WOULD YOU DESCRIBE YOUR SOUND YOURSELF? YOU HAVE SOME TEUTONIC INFLUENCES AS YOUR HOMEPAGE STATES, COULD YOU BE MORE SPECIFIC? I suppose we are a mixture of all our influences and life experiences. A part of that is German Goth and Electronic music. I think it’s mainly in the beats and sequencer rythms. Its actually very hard to catagorise yourself, which is why you are always hearing of bands making names up for their kind of music. Now you are going to hear another one! I think the best way to consider our music is to think of us as „Gothic evolved Black Satanic Industrial“. YOU SOME KIND OF REUNITED IN THE YEAR 2000. HOW WOULD YOU DESCRIBE THE FEELINGS AND INTENTIONS OF THE BAND MEMBERS SINCE THEN? ANY CHANGES IN THE MUSIC BUSINESS SINCE THE EARLY DAYS OF GOTH? I suppose our intentions are pretty much the same, if not a bit more extreame as we are older and more demented by the passing of time. You see once deviency goes past the age of 23, you are lost!!!! You will never „grow up“ (whatever that means!!!). As for changes in the music business, things are always changing. These days it’s not such a bad thing to be considered „Goth“. Back in the early 90’s when the UK establishment music press and radio tried to destroy our cultrure, it was hard to walk down the street without some braindead NME reading student having a go at us. Now it’s a bit easier, although the UK establishment Music press is now a tad embarassed at having no knowledge of what has happened over the last 10 years! Twats! YOU SEEM TO BE THE MANAGER OF NIGHTBREED RECORDINGS, TOO. DO YOU ALWAYS HAVE ENOUGH TIME FOR BAND AND LABEL? ARE THERE ANY POSSIBLE CONFLICTS BY THIS „DUALITY“? Yes mate, you are right. I am stupidly busy all the time and conflicts between all my interests hit me on a daily basis. Essentially I have to „crisis manage“ everything and hope that I manage to do a good job at some point. It’s quite hard, but hey, what else was I put on this planet for?! WHICH MEANING HAS THE TERM „SUCCESS“ FOR YOU? DOES THE AMOUNT OF SOLD CD COUNT FOR YOU IN ANY WAY? If I really cared „just“ about money, I would not be involved in this scene, especially now with all the MP3, CDR shit that is killing the scene even more! It is nice to break even every once and a while, and it’s pleasing to the ego if someone likes your music enough to buy it. You know, that thrill of someone parting with their hard cash to buy one of my albums always makes me feel humble! I have never „grown out“ of that feeling, like when you are 15 and in your first band! „People actually like my music!!!“ Success is about achiving a goal, whatever that goal is. To make people think, to make people aware. „TOTAL BLACK“ IS A NICE SONG TITLE. IS THIS A KIND OF THEME FOR YOUR LIFE? I wrote that track when I felt my life and values were under attack from various quaters. It’s a kind of two fingers up at the powers of conformity, and a refirmation of my values! So yes, in a way you are right!

AND IS THERE A SPECIAL MEANING BEHIND THE ALBUM TITLE „SEPULCHRE ROSE“? SOUNDS WELL… Thanks for asking that question, yes there is. I wanted the CD title to reflect two of the most powerful driving influences behind the album. That is the duality and power of Femininity (both positive and negative, see the song „Tragic Venus“) and the darker aspects of both Metaphysical and Physical existence. The title is at once both „deathly“ and Romantic. CAN YOU TELL ME SOMETHING ABOUT THE MADONNA COVERVERSION? DO YOU LIKE HER AS A PERSON OR ONLY THIS SPECIAL SONG? I have no feelings about her at all. She is just there, part of the establishment. I decided to record that song as I felt it fitted in with one of the the themes of the album. Plus it was one of the favorite tracks by one of my most favorite bands, namely „Play Dead“. I thought that I could put a sinister yet dancey slant on what is essentially 80’s pop candy. HOW IS THE COMPOSING PROCESS LIKE WITH MC? DO YOU START OFF WITH LYRICS, GUITARS OR ELECTRONICS? I usually get inspired by a beat or a sequnecer rythm and start to build the track around that. Occasionally it’s the guitar, like in the case of the song „Tragic Venus“, but mostly it’s from the electronics upwards. WILL YOU BE ON TOUR IN EUROPE IN THE NEAR FUTURE? YOUR HOMEPAGE SEEMS TO BE A LITTLE BIT OUT OF DATE… I am waiting for some offers at the moment. I hope to publish some dates in the very near future. WHAT CAN ONE EXPECT FROM A MIDNIGHT CONFIGURATION CONCERT? SOME KIND OF FETISH SHOW OR „JUST“ MUSIC? The days of the Fetish Show are over. I felt that people used to come and see us just to look at some bum and tit, thus missing the point of 99% of the lyrics. So we have been a live band that does not „just“ play music for some while now. We are a very aggressive band live. Every time we play the songs, we re-live the emotions that formed them and that explodes onto the audience. It’s hard to describe really! BESIDES MUSIC: HOW IMPORTANT IS „STYLE“ FOR YOU? I REFER TO CLOTHES, BODY ART, GOTHIC CULTURE… I am generally into all aspects of Gothic culture whatever it is, and I support every aspect of the scene. But I am not one of those people who just live for clothes. WHEN I WAS IN LONDON LAST YEAR I SOMETIMES HAD THE FEELING THAT ENGLISH GOTHS ARE MORE INTERESTED IN CLOTHING THAN MUSIC AND VERY EGOCENTRIC WHICH OF COURSE CAN’T BE GENERALISED. DO YOU SHARE THIS OPINION? PLEASE do NOT assume that London is the same as the rest of the UK!!!!!!!! The London scene IS a lot to do with clothes and who’s wooly hair extensions are the best and glow under UV light. You have to consider that everyone in London is from somewhere else, and they were pulled there by the whole trendy club thing that London has always. In all fairness, not everyone in the London scene is like this, but there is a sizable contingent that confirms to your observation. But please, don’t generalise! To make my point, how many Gothic bands are there that have evolved out of London? Not very many! How many have evolved in the North of the UK? Loads and loads. I rest my case!!! AND WHICH OTHER INTERESTS/ HOBBIES DO YOU HAVE? OFTEN DANCING IN CLUBS? I am very much into reading and watching Films and playing computer games. ARE THE GIRLS IN THE BAND ALREADY MARRIED OR IS THERE STILL A CHANCE FOR A DATE? 🙂 Sorry, they are all taken! AND AS YOU ARE BRITISH: ARE YOU INTERESTED IN THE ROYALS AND ALL KIND OF GOSSIP ABOUT THEM? I will say this once, and very loud. I DO NOT LIKE THE ROYAL FAMILY AT ALL!!!!!!!!!!!!!!!!! They are a waste of time and money. The UK should have a proper democracy and move into the 21st century. THANX FOR ANSWERING AND GOOD LUCK IN THE FUTURE!