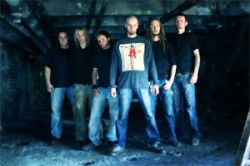 WHO ARE YOU? HOW ARE YOU? WHERE ARE YOU AND WHAT HAVE YOU DONE 15 MIN. AGO? I’m Teemu Heinola and I’m doing just fine. We had problems with our line-up, but now everything seems to be going to the right direction. We got a new member in our band, Karri Kuisma, and we found another good guitar player for our band. I was making another interview 15 minutes ago, smoked some cigarette after that and made myself a cup of coffee. WHICH ARE THE REASONS YOUR NEW OUTPUT BEING YOUR BEST EFFORT SO FAR? OR MAYBE YOU EVEN WOULD LIKE TO ADMIT THAT IT IS NOT? „The unborn“ is a great album, but „Liberation=Termination“ is a much tighter album. Of course we got some experience to make a better album this time, but still I hoped we would have got more time to make the album. COULD YOU EXPLAIN THE SPECIAL KIND OF INSPIRATION/ FORCE CREATING YOUR NEW PIECE OF ART? I’m not the right person to talk about that. Jori would be the only one who could answer to this. WHAT OR WHO WAS YOUR BIGGEST INFLUENCE AS AN ARTIST? DO YOU SEE YOURSELF AS PART OF A CERTAIN TRADITION OR AS PART OF A MOVEMENT? My biggest influence in music is Dimebag Darrell. PANTERA was the reason why I started to play music. WHEN WOULD YOU FEEL A SENSE OF ACHIEVEMENT IN YOUR MUSICAL CAREER? I think I have already achieved a lot, because I got the chance to play in 3 albums with a great band. My biggest dream would still be to be able to make tours all around the world. IMAGINE YOUR MUSIC HAS BEEN CHOSEN AS A SOUNDTRACK. WHICH FILM WOULD IT FIT BEST? Hmmm, I think in violent action movie. Some parts would fit in some kind of mystery movie, like David Lynch movies. YOU ARE ASKED TO EQUIP A SPACE-SAGGAR, WHICH DEMONSTRATE THE MENS CULTURAL HERITAGE – WHICH 3 ALBUMS MIGHT NOT BE MISSED? This is hard… but, I would choose MEGADETH – Rust in Peace, DREAM THEATER – Images and Words and PORCUPINE TREE – In Absentia. DO YOU FEEL AN ARTIST HAS A CERTAIN DUTY TOWARDS ANYONE BUT HIMSELF? OR TO PUT IT DIFFERENTLY: SHOULD ART HAVE A POLITICAL/ SOCIAL OR ANY OTHER ASPECT APART FROM A PERSONAL SENSATION? Of course, that is freedom of speech. I know some people try to say their point in their music and/ or lyrics. But I really think music should be just music. JUST IN CASE YOU WOULD HAVE FREE CHOICE: IS THERE A BAND/ ARTIST; DEAD OR ALIVE, (REGARDLESS OF GENRE) YOU WOULD LIKE TO PERFORM WITH LIVE? My choice is DEATH. I’m huge fan of Chuck Schuldiner. Alive one would be OPETH. CONSIDERING YOURSELF BEING A FESTIVAL DIRECTOR. WHICH ACTS WOULD YOU LIKE TO INVITE TO PLAY ON “YOUR” STAGE? I would invite OPETH, PORCUPINE TREE, HYPOCRISY, FREAK KITCHEN, DIABLO, DREAM THEATER, MEGADETH, SCARVE and off course MORS PRINCIPIUM EST! heh… THE WORLD WIDE WEB: CURSE OR BLESSING FOR INDEPENDENT MUSIC? It’s both… First it was good way to promote our band, homepage, myspace and even the pirate places where you can download whole albums. But now we made the third album and I think people don’t buy it enough and we have therefore difficulties to get on a tour. Yeah, but at first it’s all good promotion for a band. WHAT ARE YOUR PLANS IN THE NEAR FUTURE ON A PERSONAL RESPECTIVELY ARTISTICAL LEVEL? I just wish we could finally start to do tours. WHICH ARE YOUR OTHER TALENTS BESIDES PLAYING MUSIC? I like to make musicvideos and shortmovies, I’m currently doing both at my school. WOULD YOU EVER CONSIDER BEING PART OF A CASTING SHOW IF OFFERED THE RIGHT AMOUNT OF MONEY… DRUGS… OR WHATEVER YOU WISH FOR? Of course! FEEL FREE TO ADRESS YOUR SUPPORTERS/ ENEMIES DIRECTLY IN YOUR OWN WORDS! Thanx for the support and I hope you would go out and buy our albums! Hopefully we will see you on tour.