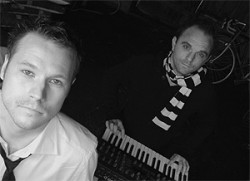 HI GUYS, WELCOME TO ONE OF MY „MYSPACE-INTERVIEWS“. I MAKE INTERVIEWS WITH PROMISING BANDS AND I THINK YOU ARE ONE OF THE BEST SYNTHPOP EXPORTS FROM SWEDEN. ON YOUR SITE THERE IS ONLY TINY INFORMATION ABOUT YOUR HISTORY. PLEASE TELL US SOMETHING MORE ABOUT YOURS… AND WHAT THE HECK DOES OSTRICH MEAN? Marcus: The name has two meanings actually… First – We had a fight regarding some kind of problem …and I told Martin that he was a kind of ostrich – just putting his head in the ground when it came to problems… Martin: And Marcus has the same problem… So we had a name for our band 🙂 Later we found out that Lou Reed once upon a time had a band called THE OSTRICH… So you could say it’s a tribute to him as well 🙂 WHAT ARE YOUR INFLUENCES AND WHERE WOULD YOU POSITION YOURSELF IN THE SCENE? Martin: We have different kinds of influences… I think that people are heavily influenced by music they hear when they are 12-15 so I actually think my influences are KRAFTWERK, DURAN DURAN, YAZOO, DEPECHE MODE… Marcus: – Well in that case my biggest influence would have been Tarzan boy With Baltimore… he he, and that would bee a shame!. Seriously, my biggest hero of all time is Bob Marley and he was one of my dad´s biggest idols as well, so I grew up listening a lot to him… Maybe there’s something to it after all. Martin: – we have really different backgrounds.. I am a Synth-guy and he’s a typical rock-guy… and you can actually hear that in our sound. Many songs are built with 3-4 notes and then an easy chorus. Simple and short :-). And that’s our unique selling point… We take the best from both worlds so to speak. YOUR SONGS SOUND VERY PROFESSIONAL FOR A MYSPACE BAND, DO YOU WANT TO RELEASE YOUR “RECORD” BY YOURSELF OR DO YOU SEARCH FOR A LABEL? Actually we always have problems when we put up a new song. The sound always gets to low or the voice or the baseline disappears and so on… but that’s a problem for all MySpace-bands I guess so… What to do. But thanks anyway! We don’t shop for a record label, but we don’t exclude anything. If we find the right company it can be interesting! But we would really like a PR-manager or someone who can get us gigs in other countries; we would love to go to Germany and other countries to perform. We also would like to find a good producer. WHAT IS YOUR WAY OF PRODUCING, WHAT KIND OF INSTRUMENTS DO YOU USE? Martin: Well first of all we are living in different parts of Sweden so we are kind of limited in our recording-process… But when we write songs, it always begins with Marcus having a couple of songs he plays on the guitar and then we select the ones who really linger in the mind… Marcus: then we basically record it in reason 4… Martin: It’s of course much more complicated than that… but it would take ours to describe how to produce… Man it takes a lot of time!! DID YOU EVER PLAY LIVE OR IS THERE A CHANCE TO SEE YOU ON STAGE IN THE FUTURE? We have both played live with other bands, but not with OSTRICH. Even though we created OSTRICH in 2004 we didn’t get serious with it until around 2007, so we are quite a young band. We don’t have any songs laying around, as soon as we finish a song-we put it up on MySpace. SWEDEN IS FAMOUS FOR GOOD BANDS AND POPMUSIC IN GENERAL. DO YOU HAVE ANY IDEA WHAT’S THE REASON BEHIND IT? Marcus: The Swedish people are quite restrained, so if you have something to say or express you either drink a lot of alcohol or start a pop band. Or maybe both… Martin: Yea and I think we have good circumstances here… and maybe successfully Swedish bands make way for new bands and so on. WHAT DO YOU THINK ABOUT THE CURRENT SCENE? DO YOU HAVE ANY SPECIAL FAVOURITES? Martin: APOPTYGMA BERSERK is the best Scandinavian band at the moment, they are always challenging themselves and strive for development. Marcus: That’s probably why DM are so good, I mean look at “Speak and spell” and then compare it with “Playing the Angel”. WHAT ARE YOUR PLANS FOR THE FUTURE? To tour in foreign countries and to master our first record. IF YOU HAD ONE SPECIAL WISH, WHAT WOULD IT BE? Marcus: I hope someone will by my apartment for a reasonable price. Martin: I hope my daughter enjoys herself and manage to pass through life happy, as long as she can. LAST QUESTION, DO YOU WANT TO TELL US SOMETHING THAT WE (POSSIBLY) DO NOT WANT TO KNOW 😉 Martin: A cool thing: In the beginning of our song: passion for slaves there are a distorted sound in the beginning, which actually is the sound of my vacuum cleaner 🙂 THANK YOU FOR THE INTERVIEW AND I HOPE WE’LL MEET SOMEDAY AT A CONCERT OF YOURS. Thank you Ralf! We hope we will meet you, when we come to Germany for a concert! Good luck with your own songs! Best regards Martin, Marcus In Ostrich