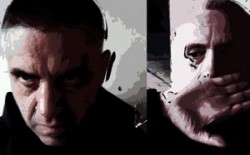 YOU HAVE BEEN AROUND FOR A LONG TIME NOW. HOW DID MUSIC CHANGE OVER THE YEARS IN YOUR EYES? The quality and way we listen to music has deteriorated at the same time as our options to find and access music have increased. I don’t think music gets the respect it deserves or at least the respect it used to. Our desire to make hard edged electronic music hasn’t diminished. At the outset of portion control we were early adopters of the new technologies which still apply today. The creative process will always have challenges beyond the tools to make it – today we complain of having too many options, but good music will always find a way to surface THERE IS A LOT OF NEW EQUIPMENT AVAILABLE NOWADAYS. DO YOU USE THAT STUFF AS MUCH AS YOUNGER BANDS OR DO YOU STICK TO THE GOOD OLD HARDWARE GEAR? Naturally we grew up and learned our trade on the early analogue gear but now only use software – which is getting better and better. With the major DAW’s, ableton, acid, native instruments stuff, fxpansion etc it is a good time to be making music at least from a technical point of view. We readily absorb the latest technology and our early synthesiser knowledge can be put to good use as the principals are the same today. YOU HAVE WORKED UNDER A DIFFERENT NAME FOR A PERIOD OF TIME: SOLAR ENEMY. WHAT CAN YOU TELL US ABOUT THAT? This was at a time when we legally couldn’t use the name Portion Control as we were winding up a deal with London Records. We were becoming uneasy with the whole process and never really had the right equipment or passion to make solar enemy deliver our expectations YOU HAVE GROWN UP WITH MANY OTHER ACTS AND LEFT TRACES IN THEIR MUSIC. WHAT IS YOUR OPINION ABOUT FRONT242? Front 242 were pioneers of the scene. I remember hearing the “body to body” 7“ and it’s very electronic tones were rare at the time plus it had a sort of European feel that wasn’t present in UK industrial at that moment OR WHAT ABOUT SKINNY PUPPY? When Skinny Puppy started we would regularly get contacted and we have a lot of admiration for their earlier works. This period’s more experimental twisted stuff stands up well today. The whole US/ Canadian slant on industrial took it into a more rock orientated direction whilst in England we were more associated with the UK scene populated by Coil, Chris and Cosey, SPK (who were living in England) etc. AND, LET’S DO A LAST ONE: LEAETHER STRIP? 😉 Have to confess I don’t know Leather Strip material AFTER A TEMPORARY BREAK YOU CAME TOGETHER AGAIN IN 2004 AND REVIVED THE BAND. DID YOU FEEL THE NEED TO CONTINUE WITH THAT PROJECT? Our desire to create and write with just software became a possiblity in 2004. We were excited by the possibilities the new technologies offered – we certainly felt we could create with as much vigour and use our collected experiences. I met with Dean at the British Museum, Henry Wellcome exhibition over a number of weeks whilst we devised the Wellcome double CD pack (2004) WE ARE OF COURSE VERY HAPPY THAT YOU ARE BACK AGAIN. THE SOUND IS GREAT AND IT WORKS WELL IN THE CLUB OR WHEN DRIVING. WHY DID YOU DECIDE TO RE-RELEASE THE OLD STUFF AGAIN? It’s difficult for the older established bands as we are known for our earlier works as well as being discovered by new and younger listeners. We had received a number of emails from people collecting the original vinyl and released that at some point we would re-issue the vinyl material on CD – In 2006 archive was released as a CD boxed set. This has also meant we can focus on our new material into which we put a lot of time and effort. CROP IS A DOUBLE-CD AND CONTAINS, AS MENTIONED BEFORE, A LOT OF OLDER MATERIAL AND SOME NEW TRACKS. LET US TALK ABOUT THE NEW MATERIAL. WHAT CAN YOU TELL US ABOUT „BRAIN SCRAPER DEATH DIVE (REBUILD)“? “Brain scraper death dive” was originally released on Psycho Bod saves the world and we had rebuilt it for our live set. It is part of a slowly building catalogue of rebuilt older tracks along with refugee, chew you to bits and havoc man WHAT DOES NTRSN MEAN IN RESPECT OF THE GENESIS OF „DEFEND“? Defend originally appeared on SLUG and we added a remix kit for it to the SLUG microsite. NTRSN are a band from Belgium who sent us the version that appears on crop. WHAT IS THE BACKGROUND OF WITNESS/ TRANSMISSION? THIS SEEMS TO BE VERY EXPERIMENTAL… Our live transmission is currently called “witness” and this track was the opening piece for a number of appearances WHAT IS THE STORY BEHIND AMNESIA? When we started our next as yet untitled project we determined to have a number of straight forward song orientated pieces and amnesia was devised as the first piece AND WHAT ARE YOUR PLANS FOR THE NEAR FUTURE? All our work at the moment is in sound design and sequencing for the next all new CD. We are very pleased with the progress so far and hope to release this early in 2010 THANKY YOU FOR SHARING YOUR TIME AND ALL THE BEST FOR YOUR “COMEBACK”!