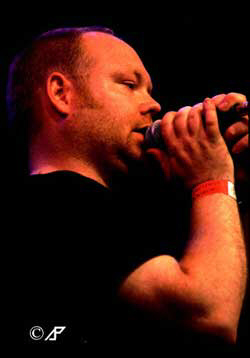 HI! WHERE ARE YOU? WHO ARE YOU? HOW ARE YOU? We’re living in different towns, as we have done for quite some time now. I’m living on an island in the baltic sea where I take care of writing and producing all the music. Palle and Ulrika are living in Jonkoping, Sweden. Palle is responsible for the male vocals and Ulrika takes care of the visuals during our live performances. It’s the three of us that are permanent members of Sanctum. Sara-Lo av Ekenstam joined us for the track a-pose on “let’s eat”. IT TOOK 8 LONG YEARS SINCE THE “LUPUS IN FABULA” RELEASE – WHATEVER HAPPENED IN THE MEANTIME? HAVE YOU BEEN MUSICALLY ACTIVE WITH OTHER PROJECTS? I have written music for Azure Skies and Mago and several dance performances and I even started to write an opera that never happened. All the music I wrote for Sanctum during those 8 years unfortunately got lost during the process in one way or another. Palle, who also joined Azure Skies and Mago, put a lot of work in his own band Counterblast. With all of us living in different places we did not meet too often anymore. That Marika who played the cello had to stop playing due to problems with her arms and that Lena left the band to focus on other things nearly put Sanctum to sleep for good. But Palle and I locked ourselves in a studio for an intensive working session and finally we not just had gained new energy but also had tons of new material. HOW DID YOU CHANGE PERSONALLY IN THE LAST YEARS? DOES IT SOMEHOW REFLECT IN THE SOUND? I’m sure that I have changed but it is difficult to say in what way. I have been moving a lot. Lived in Berlin for one year and during the last two years I have been living on an isolated but amazing island in the baltic sea. I’m quite sure that those two places, which differ a lot from each other, have affected me. I have found new ways to write music and you can for sure hear that stuff has happened since “lupus”. HAS THE MATERIAL ON YOUR NEW ALBUM BEEN WRITTEN OVER THE LAST 8 YEARS OR IS IT MAINLY “NEW” MATERIAL? It is mainly new material, all written within the last two and a half years with the “let’s eat”-theme in mind. One track is from earlier sessions but we thought it fits well on the album so we included it. WHAT DO YOU CONSIDER THE MOST IMPORTANT CHANGE IN SOUND BETWEEN YOUR TWO RELEASES? The fact that Lena left the band and that this album is rougher and somewhat more straightforward compared to “lupus”. WAS COLD MEAT INDUSTRY YOUR FIRST CHOICE IMMEDIATELY? IS IT SOMEHOW AN HONOUR TO BE IN THIS LABEL ROSTER? To work with Roger is always a pleasure. With this in mind and all the freedom he gives us, we didn’t see any necessity to find a different label for Sanctum. HOW WOULD YOU DESCRIBE YOUR PERSONAL RELATIONSHIP TO ROGER KARMANIK? What stories are you out after:)? As written above, we like working with him. The occasions we meet aren’t that numerous but if it happens, they are festive. COMPARED TO OTHER PROJECTS ON CMI YOU NEARLY SOUND LIKE “POP” – EVER HAD ANY PROBLEMS WITH FANATIC “NOISE MANIACS”? I can’t say that we have had any problem with that. It’s probably more evident that some people have problems with Sanctum. I guess we don’t fit into their picture or we can’t offer the coolness they search for. We just do what we think we have to do and we enjoy it – not to fit into categories. THE TITLE “LET’S EAT” ESPECIALLY COMBINED WITH THE BOOKLET ARTWORK SEEMS TO BE CRITICIZING THE “MODERN” CONSUME SOCIETY – OR AM I TOTALLY WRONG? That’s right, the album is dealing with consumption and greed, with the society we’re living in and the feelings that are evoken. WHAT DOES THE BLOODRED COVER STAND FOR ANYWAY? STRENGTH, PURSUIT, THE DOWNFALL OF MANKIND? It is interesting what happens when the listener interacts with the album and interprets it. If I give away all our thoughts then that doesn’t happen. We probably pictured the eagle eating a lot. And we needed to have the teeth quote in the booklet.

WHERE DID YOU MEET SARA-LO AV EKSTAM AND WHY DOES SHE ONLY PARTICIPATE ON ONE SONG? I got in contact with her through Mental Destruction. We were looking for a woman that could sing on “let’s eat”. So we decided to give it a try and recorded some tracks, but only one track really fitted the theme and the album. We’ll see how our collaboration with Sara-Lo continues in the future. “SHINE” IS MY FAVOURITE TRACK AS IT COMBINES HYPNOTIC RHYTHMS WITH FABULOUS ATHMOSPHERE, DO YOU LIKE TO COMMENT ON THIS SPECIAL TRACK? Shine turned out pretty well. It was originally written for Azure Skies but as it evolved I felt that it really was a track for “let’s eat”. I wanted to create a monotone feeling with the rhythms and make a organic feel to it with some keyboard variations. The rhythms are junk recorded on a back yard. AND HOW DO YOU COMPOSE A “TYPICAL” SANCTUM TRACK? WHERE DO YOU GET INSPIRATION FROM? Usually I have an emotion that I want to express. The inspiration can probably come from basically everything. I start looking for something that can trigger this emotion. It can be a sound from a synth, a sample, drum pattern or any other sound. The search for this trigger can take a while but sometimes it goes quick to find it. Then I start to build the track around this trigger. I’m trying a lot of things to see what is enhancing the feeling best. When I’m kind of finished with the track I let it rest for a while. And come back to it later with fresh ears and working on the details. HAVE YOU THOUGHT OF DOING A VIDEO CLIP FOR ANY OF THE SONGS? We have one almost finished for the cmi100 DVD. And I can really see us doing something more visual that we make available for the audience in the future. As our work with the visual expands it would feel natural to include that on a disc. So maybe we’re doing something on DVD when the time is right. YOU PLAYED AT WGT LEIPZIG 2004 – WHAT DO YOU FEEL ABOUT THIS GIG, WAS IT A PERSONAL SUCCESS TO YOU? HAVE YOU ATTENDED OTHER SHOWS THERE? WHAT DO YOU THINK ABOUT THE SO CALLED “BLACK SCENE” NOWADAYS? It was a blast. Meeting old friends, performing and having some beers, it can’t be better. I was very happy how the performance turned out. We hadn’t performed live since three years I think, and it was hard to tell how the audience would like the new material. Besides performing we didn’t have too much time, so we basically just had a chance to look at all the other cmi bands. HAVE YOU ALSO STAYED AT RENAISSANCE HOTEL IN LEIPZIG? CONTENT WITH THEIR SERVICE? We didn’t stay there this year. But we have done that two times before, then we were all happy with it. We had a good time in the bar I can recall. HAS ULRIKA CARLSSON BEEN INVOLVED AGAIN? DO YOU HAVE ANY INFLUENCE ON HER VIDEO ART? Nowadays she is always on stage when we perform. We can always discuss visual ideas and sometimes we contribute with video clips or animations but she has the main responsibility for the final result. I’m very happy to be able bringing this extra dimension to our performance. BESIDES MUSIC: WHAT ARE YOUR INTERESTS/ OBSESSIONS AND WHICH MUSIC DO YOU LIKE IN PRIVATE LIFE? I very much appreciate contemporary art and film. I find so much pleasure in it so I take every opportunity to experience and keep myself updated in those areas. What I listen to depends on mood and occasion. Neubauten works very often. HOW LONG WILL IT TAKE UNTIL YOUR NEXT RELEASE WILL BE IN THE SHELVES? HAVE YOU DECIDED TO BECOME A “WORKING ANIMAL”? 🙂 I think I’m already a working animal. Sanctum is just one of my projects. Next in line is Parca Pace. I want to do something instrumental… maybe bombastic, maybe cinematic. But I will do everything I can to make sure that you don’t have to wait till 2012 for a new Sanctum release. WHAT ARE YOUR PLANS FOR THE NEAR FUTURE AND WHEN WILL THE NEW HOMEPAGE BE ONLINE? Like I said before I will now focus on my solo project Parca Pace. I have just finished writing music for a dance performance that will take place this autumn. A new Azure Skies is also in the making. So I guess I won’t have any problem to keep myself busy. The home page will be up soon. I think you will like the improvements. THANX FOR SHARING YOUR TIME AND GOOD LUCK WITH YOUR VERY STRONG EFFORT. Thank you! COPYRIGHT FOTO: www.photo-ap.net