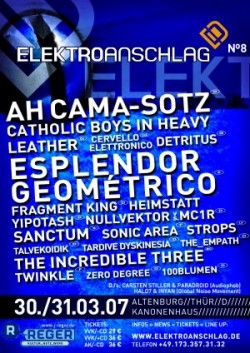 First of all we arrived to berlin already on thursday, due to rearranged easyjet flight schedules there was no flights on friday, which was really inconvenient, but turned out nice after all. And here comes altenburg! Starting already with sunny weather and friendliest hotel personnel ever – this was one of the best festival trips ever! First of all hotel Astor is really nice, few minutes of walk from bahnhof (which is quite useful, considering that we had to take our train back to berlin straight after the end of ea at 6:23 sunday am), and also to the venue itself is less than 10-15 minutes of walking. That what i would call a luxury holiday! Kanonenhaus welcomed us warmly – with mr.gandy himself on the doors! And few steps later some smart locational changes, which positively improved the whole atmosphere. The stage room was now expanded greatly, wardrobe was squeezed to the space left on left side, where in previous year was merchandising room and such, and the latter with all those fabulous hands, ant-zen and cd counters formed a cozy lounge with bar and sofas in the back room. Anyone who yearned to eat something meanwhile could handily get snacks at the entrance doors outside – bratwurst and sashlyks and even some vegetarian concoction. Everything was taken cared of. Superprima organizing! Plus! – lights were totally amazing this year!

First day took off with THE_EMPATH, this is a project of Mike Erkau, I made a first acquaintance with this project year ago at berlinoize, it struck me as really good discovery and I was glad to hear him at ea too. But what really got me was CERVELLO ELETTRONICO!!! Maaan!!! Whatta power and rhythm!!!! Yes, you just can’t resist dancing! Technotic, rumbling, overwhelming! A blast! I’m really looking forward to be present at his gigs as soon as possible again! Later after on our train back to berlin we shortly met him sitting in the same wagon, he said he was on his way to new york, but will be back soon for gigs in prague. Lucky prague!!! Then it was time for something I was really waiting for so so much! TALVEKOIDIK! And that was a nice debut! Deep, meditative and touching. It is something for the depths of the soul, the sounds that reach you deeply under all layers of consciousness, flowing into your soul making you see the life from a whole different perspective.. The visuals of koyaanisqatsi boosted that effect, matching concept more than perfectly. These were the moments for feelings, contemplations and introspection.. People were a bit under the spell demanding more and more after the set was closed. It was really wonderful. I felt so elevated. And I guess there’s plenty of reasons for Unit299_09 to be proud of. This was also a day of releasing the first very own album of TALVEKOIDIK, titled ”silent reflections”, one could get one from the merchandising counter. It looks really great – and sounds even better! FRAGMENT KING, released under invasion wreck chords, came along with insanity! Still was a bit too guitarry for my taste, but I very much enjoyed when the Ambassador21 joined the king on the stage and it all became a sheer raging provacation! Then there was SONIC AREA straight from France and right after that DETRITUS. Oh that was a flow and atmosphere!! One of my top fave sets! I was absolutely enchanted by its melodies and beat waves! Amazing! Though later a friend of mine told me that DETRITUS Dave painfully reminds her of Filip Kirkorov! Well!! If Filip would make such brilliant music – I’d be one of his greatest admirers. After that the hall became powered by the great holy spirit! Ladies and gentlemen! – benedictus XVI proudly presents! CATHOLIC BOYS IN HEAVY LEATHER! Oh yes! We needed that spiritual experience!!! Boney M raped by Tom of Finland! How much more kinky it could get?!! Definitely something you won’t see even in your dirtiest dreams! Or at least I hope so! It was so much fun!!! I couldn’t stop giggling for a second! And I guess their biggest fan right in the first rows – was Christian from PAL! Somehow dunno know how i got their drumstick, got it signed for fun, and just yesterday I discovered my cat ate a half of it!!! Bastard! I will sell him to circus! The last wonder of friday night was to shine bright. AH CAMA-SOTZ came onto stage with good old bat herman (I wouldn’t be surprised if one day he would spread his wings for the audience, he becomes more and more resembling to a sinewy bat with every year [I consider it as a good sign]) and sal-ocin with his exotic percussions (EMPUSAE, also seen with THIS MORN’ OMINA). That was the most soulful AH CAMA-SOTZ live for me, it was somehow organic, mythological, temptingly relaxed, carrying you with its natural tides, like purple full moon, smoothly, so carefree.. I felt safe there.

Saturday! The sunshine! Over the bridge we go and back at kanonenhaus we are! Haa! 100BLUMEN harsh as triffids’ attack! Beware! I enjoyed that, wall of mass destruction beats!!! Wow! Flowerpeople – hear that! NULLVEKTOR and MC1R made a perfect team. Very strong! Catching drive! Expressive, aggressive, oppressive! I loved that wildness! MC1R’s icy coolness versus nullvektors burning craziness! Sparkling stuff! And the hell-of-a energy!!! STROPS. Strops was really at its best. Utterly deep, dark and desperate. It nailed the audience to the ground, hearts almost skipping the beat. It was so impressive. Intense emotions scarring our souls, so deep.. So real.. I must say it was the gloomiest and most heavy performance of the festival. Every single time I’m present at their concerts I’m utterly impressed as at the first time. The way they live through their songs and that immense aching and grief over and over again – that what makes it so real, slashing into our hearts. My latvian brothers, I take my hat off before you. TWINKLE – twinkle, twinkle, twinkle! :p so damn frisky and playful! Lots of variety throughout the whole set. Sparkling samples! So frolic and wicked! Pure joy and bodypainting was a masterpiece! 1 IMMINENT + 2 SYNAPSCAPE= THE INCREDIBLE THREE! Yess!!! What more can i say! Isn’t that already a perfect cv enough! Smashing trinity! Later joined by a gummi dinosaur (I suspect that was Jutta..) Phil throw away his shirt, almost killing his equipment with his energy! Tim sang microphone almost to bits. And mr.moreau headbanging savagely in all four directions of the compass! Masterful sound experiments. Oh all those incredible ants!!! You gonna take over the world!! SANCTUM. Well – riiiiight!! If someone comes from Cold Meat – you can see it in a first glance! Dunno – but all the CMI projects has something unmistakeably CMI’ish about their appearance! Something very brutal and untamed! Or is it all about beards! And even if they all haven’t got beards, it still feels as if the do. Performance was as heavy as expected, even somehow hypnotic, and I couldn’t escape the feeling that there was a lovely red-bearded gnome, or someone from the middle-earth at least, singing all those heartbreaking songs on the stage. It was very penetrating though. As a super bonus – we spotted quite long footage of the t-centralen on the videoscreen!!! It made us squeal with funny exhilaration! well yes.. People and their reactions are sometimes mysterious.. And then! (sounds like ant-zen, but it’s not what i wanted to say..) Then! ESPLENDOR GEOMETRICO – legendary spaniards! They’ve been around making strange music since I wasn’t yet unleashed from my kindergarten! The masters! They had the audience in a second! Psychedelic spontaneity, whipping emotions, caustic sounds! Stage diving, microphone biting, insanity of geniuses! That was a thrill. HEIMSTATT YIPOTASH! More joyful and cheering than you would imagine!!! It was the best choice to let them close this years Elektroanschlag! It filled us with such and energy and positivity – it still pulsates in my veins! Made me feel lite and brisk! Dancy and happy! Such a delightful set!!! Perfect End for a perfect festival! It was a wonderful time! Can’t wait to see you all again!