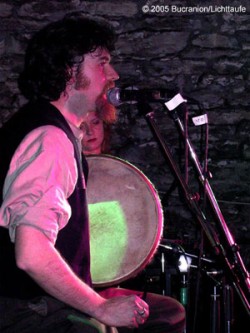 Arriving in the early afternoon at Wasserschloss Heldrungen in Thuringia. A beautiful castle on an artificial island surrounded by water, meadows, trees. Feeling like a troubadour being invited on a magical island with a treasure hidden somewhere in its underground. An amazing dream coming true: Nothing is a matter of course. Being thankful for the possibility to perform in venues like this. Too many memories of dusty concert places in the past. The first day of April like a summer day. The sky gentian-blue. Meeting other friends and troubadours on this Zauberinsel. Making the acquaintance of a lovely young gentleman named Aldwyn Everett Cornelius Moynihan.

ALLERSEELEN performing using the name FLORES DE FYER, an expression taken from a fairy tale from the Dolomites where the people are still talking Ladin, a language which is called the Edelweiss of the Romanic languages. The Hungarian drummers martial and precise as always, the Austrian bassist as passionate as usual. Several very old and some very new songs. The new song “Wir tragen ein Licht” (on the ALLERSEELEN DoLP Sturmlieder) being dedicated to John Balance, the influential late singer of COIL. During this song the singer holding in his hand a human skull with a black sun painted on its forehead – not the black sun of the Wewelsburg in Westphalia, but the alchemical black sun that COIL used as emblem.

Visiting Weimar in the morning. The Schlangenstein in the park close to the creek Ilm – a beautiful sculpture of a serpent surrounding a stone from 1787 by Gottlieb Martin Klauer – a beautiful symbolic manifestation of the power of spirituality, wisdom over matter. But this Serpent Stone was an imitation – the original had been heavily damaged in early 1945 by aircraft bombs. Was this destruction another allegory? Returning to the idyllic island Heldrungen. In the water boats, swans. Being interviewed under the trees close to the castle for the DVD edition of Flammenzauber V.

STURMPERCHT – an unforgettable live performance far away from their mountains. A powerful and incredible manifestation of the Austrian Way of Life. Hypnotic alpinism. Many songs based on the legends of the magical mountain Untersberg. The musicians heavily costumed like the wild hunt. The singer like an ancient medicine man wearing a fur and a huge pair of antlers. Accordeon, bass, guitar, drums. On stage surrounded by a huge amount of Austrian handicraft – branches, antlers, various totems – obviously the members were fighting on stage in vain against their homesickness. AGNIVOLOK – beautiful mystical Russian songs performed by Vera Agnivolok.

Returning after these sunny days to a dusty city making me even more aware of having participated in a very magical event, an incredible festival taking place in another land, in another time. Dreams that came true in a field of force named music, memories of a peaceful and powerful Flammenzauber 5 – these memories being the actual treasure of this castle and island which the listeners and musicians are taking with them in their adventurous hearts. Being glad and grateful having been a part of this field of force. A Dankeschön to all the organizers of Flammenzauber 5, the activists of Lichttaufe and Zinnober.