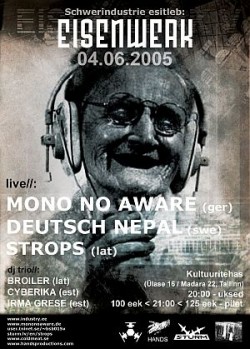 Year 2005. The first days of early June. Grey nordic summer. Lazy rain.. Shifting realities… Darkly glooming factory building, placed on the edge of the Universe. The point of ceaseless transformations. Booming heart of industrial underground. This is Estonia – EISENWERK V. That’s the 5th event organized by Schwerindustrie, the Estonian industry-commando of few activists, giving all their efforts to push the Scene into move and prospering here. As well this squad runs related website and forum with the fast growing community, uniting likeminded people all around the Baltics and even farther.

Like the previous Eisenwerk (with KLANGSTABIL as main act) this one takes place in an old Soviet factory of „Polümeer”, which once was known of peculiar velvet-covered toy production, filling all the markets all over the USSR.. but now mostly resting in peace and silence.. till 4th of June 20.00! Dj Cyberika leads us in to this world of powerful sound terror. Gentle set, mildly noisy, rhythmic and feminine. Very good appetizer, letting teasingly taste what’s up to follow. The first live act is one of the most unusual industrial projects from the whole Baltics, coming from Latvian cult-label Sturm, STROPS. Silence.. the growing drone of the beehive (“strops” means “beehive” in latvian), the ominous buzz of millions of bees.. seconds… and our world is blasted with the brutality of noise! Fragile and breaking melody lines. Shivering sound sequences and stinging elements. Limits crossing desperation, rage and inner pain. In white overalls in a red pulsing light – a hybrid vision of nuclear technicians versus experimenting apiarists. One man screaming agonizingly on his knees, down on the floor.. aching, aching.. The second beating strange percussion instrument of compounded iron pipes.. So unreal.. and soul scarring.. Deeply strange and unparalleled project. They reach your soul, they will hurt.

STROPS has gained respect and admiration fast all over all three Baltic states with its uniquely impulsive performances. Aggressive, cold and uncompromising in structure and body, yet deep and fragile underneath the skin… that might describe well the music of STROPS. In live on stage, Yorics, the real soul of STROPS, wakes machines up and alive, as well offering impressive vocal statements, whilst tall percussionist’s backing him fiercely. All world is full of desperate rage and pain of existence. Impressive, impulsive and honest. From the very beginning till the very last second. Dj Grese follows as heavy as a whole frontline of black steel tanks! Wonderful! Factory shakes in powerful soundquakes…
And then it’s time for this charming character of DEUTSCH NEPAL! Lina Baby Doll – takes the stage over with his careless elegance, one hand clenching the beer bottle of local Pärnu Zhiguli. And the thrilling voyage into the hidden sides of the human psyche begins. It’s dark and bottomless. Welcome to the never ending fall into Abyss. The atmosphere is overwhelming. This is the Dark Oppression. The sound artillery of DEUTSCH NEPAL marching in to your brain gyres, taking over the power. The total audio Putsch! With side effects unknown. Audience fully conquered, he smiles his cunning devilish smile – and pulls down his pants! To shock the public with the most wicked outfit – HAA! – the brown fluffy teddy-pants and a little bob-tail on butt! Shaking his bum joyfully, tail bouncing, he grasps for the blackmetal guitar to make it wail in his hands. O’ that was psychedelic! Totally insane and wild! And all those mind piercing vocals! Sounds vibrating under the skin and basslines resonating in our lungs. That’s DEUTSCH NEPAL.

It left us defenceless. Breathless. And later I hear many people, with the wide scale of DEUTSCH NEPAL concert experiences, saying – that this one was the best one they’ve ever seen! Dj’s cooling down our steaming hot brains for less than an hour, a preparation for the next attack to come. MONO NO AWARE – the honor and glory of German Hands label! Sounding as the hammering heartbeat of giant machinery versus roaring jet engines. Experimental, overwhelming and powerful – MONO NO AWARE – yet highly danceable in noise and rhythm. Smashing power noise! Divine rhythmic structures and patterns of sound. The world transforms into an organized scheme of impulses. Nervous system becomes addicted to this new biorhythm of fast beats and mindblowing corrosion. Blinding lights! Mesmerizing power of sound! The pure energy of rhythm! Consume it in full! This is an audio architecture supreme. An enigmatic sound construct of massive ferroconcrete noise-frame and crystalline fragment-designs, appearing as perfect shiny microcicuits.. And filling all axes of perceptive reality. Leif Künzel, the Engineer himself (wearing red KRAFTWERK shirt) – so brisk and alive behind the Worshipped Soundmachines. He knows how to do it! He shines! And adoring filled dancefloor beams back. Energy creates energy. Audience dances, sweat flows, heat grows – as if it was the last night before the End of the World. This is madness! Enrapturing live! Unforgettable night! Huge factory working in full power and noise. To help us face the dawning new morning – dj Broilers opens his dj-case. And mr. Broilers knows no mercy! Massive power noise, strong tracks, harsh and irresistible rhythmics! You are forced to dance! And you can’t stop, until you drop! Clock just keeps ticking and nobody cares. World is all about rhythms, noise and movements.

…The brand new day starts to form out of shadows and dewdrops… Factory falling to sleep once again.. And everything seems like before.. And yet somehow utterly different. World is not the same.

EMIGRATE - The Persistence of Memory
14. November 2021