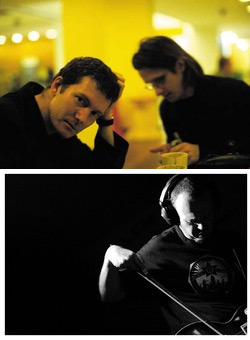 The music of the night is still spinning in my head as the train is flying through a tunnel of darkness. I’ve just spent half an hour randomly roaming the nocturnal trainstation of Gelsenkirchen, wandering in between faceless strangers and strangely misplaced schoolgirls dozily devouring their Kebab, half-heartedly gazing at window displays filled with books and mags about local footballclub Schalke 04 and buying myself a late Apple-flavoured Slush Puppie from an artifically cheerful stand smelling vaguely of popcorn, waffles and coffee. I am still sucking on the frosty-sweet icicles, as the car passes a construction site. In the heart of infinite blackness, workers are busy welding tracks, the red-hot orange glow of their irons exploding into miniature fireworks of glistening sparks. The biting cold on my tongue and the burning images on my retina, they suddenly make for an astoundingly suitable metaphor for what I’ve just witnessed.

Only an hour earlier, I was stilting down the steep stairs running down the side of the Savoy Theater’s main hall to the sounds of the second encore. Half of the auditorium had risen from their chairs to clap No Man back from the backstage area, trying to hold on to a moment they’d been anticipating for 15 years. The band was taking it in with obvious delight, but without any kind of airs and graces. In the best of British traditions, they’d played for roughly an hour and then taken back to the stage for an additional dose of sweetness without much ado.

While some may have been expecting them to make use of the encores to uncover some of the heavier material from their oeuvre, this obviously wasn’t a night for wild mood swings. No „Pigeon Drummer“, therefore, the hard-hitting black hole of current album „Schoolyard Ghosts“ and no outtakes from their excursion into the „jazz-inflected triphop“ of 1999-opus „Wild Opera“. Instead, No Man kept the ambiance dense and hypnotic, carving out a sensual rendition of „Watching over me“ and staying put in their mould of romantic torchsongs about loss and longing.

It is a fragile equilibrium they are maintaining. For most of the evening, singer Tim Bowness restricts his in-between-track announcements to spelling out song titles as if afraid of tearing the tender fabric of the acoustic movie he and his colleagues are shooting. His vocal delivery is entirely concentrated on melody and mood, on shaping out the coarse smoothness of the themes and paving the emotional ground for the band to pick up upon. Right from the very first note, you realise what a classic voice in the true sense of the word this man has – somewhere between an introvert crooner and a heartbroken soul singer.

Despite the show being consciously conceived as both presenting old and new material, the dream-like quality and finesse of „Schoolyard Ghosts“ pervades even longtime favourites such as „Things Change“ or „Time Travel in Texas“. No Man have deliberately or involuntarily stayed clear of concert halls for ages, but in the live situation, their true talents are coming to the fore clearer than ever: The progressive tendencies of some of their more stretched-out epicds aside, Bowness and Wilson are really astute and crafted songsmiths, whose pronounced love for the compact style of the 60s is anything but flirtateous coquetry.

The Savoy is the ideal venue for Bowness introspections and the band’s cropped-up determination. With its majestically ascending rows of plushy fold-away cinema chairs, it conveys sensations of burlesque cabaret and David Lynch’s oneiric back-alley palace „Silenzio“ from „Mulholland Drive“ alike. From all the way up where I’m sitting, the band almost look like actors in a Greek play, all but immobile and in full concentration, with only Wilson dancing barefoot from the back of the narrow stage to the row of effect pedals in front and Keyboarder Stephen Bennett jumping up and down in excitement and sheer delight.

As much as the night is about songs, it also feeds from the imposing dynamics and flexible timbres of this tightly interacting formation: Guitarist Michael Bearpark acts as a quiet counterpoint to Wilson’s sonic wizardry, adding delicate pickings, subtley crunching chords and powerfully understated, blues-drenched licks. Andy Booker triggers shaker grooves and Bongo patterns as well as panning and phasing hihats and snares from his electronic Drum kit, while Bennett’s textures provide layers of mysterious density. Most remarkable, perhaps, are the contributions of Steve Bingham (presented by Bowness as „the man on Violin, leatherpants and stomach sickness“), whose emanations range from the gruffy and folky to astral mantra-like sequences and one-man orchestrics on the one hand – and of Bassist Pete Morgan on the other. Morgan’s sound is warm and envelopping, powerful and pumping, rubbery and robust. His lines of sleepwalking funk insistently propel the pieces forward, while also preventing them from getting too sugary or loose their grounding.

And then, of course, there’s Steve Wilson. Not a man of grand gestures or populist poses, you can clearly see he is enjoying himself down there. He eschews solos, but when he does play them, his notes are intense and associative, developping an inner loudness and an allegorical drive. On „Housekeeping“, his introduction is pure sound art, a cyclic loop of three chords of airy drones floating through the theatre weightlessly and in soft harmony, before Bearpark juxtaposes the scapes with almost raindance-like minimal Guitar figures.

His biggest moments come in the middle sections of the longer pieces, though, when pensive pondering turns to fearful frustration in search of a valve. These sections start out with nothing but figments of melody over a fixed harmonic scheme, but gradually build into walls of noise and emotion, billowing blankets of rhythm, resonance and roar. At one point, well into one of these Post Rock erruptions, Wilson seems intent on watering his instrument with the blood of his sore hands, strumming the snares in a turbulent tremelo rising from the depths to a surpressed scream.

The band always gently breaks his fall, however. This is the image I perhaps remember most intently from the performance: When I enter the hall right at the beginning of the concert, the band has already started playing and I first have to adapt my eyes to the combination of deep darkness and blurred colours. When my vision is restored, I see the band just standing there, playing their instruments without even once looking at each other. And yet, as Bowness circles the words „Timetravel in Texas, See where it gets us“, No Man emanate nothing but aplomb and power – you instinctively feel they could go anywhere they want from here.

Dirk Serries already has. His opening support slot as Fear Falls Burning proves that musicianship and dedication can take you far, even when your intentions have nothing at all to do with pleasing the masses. Of course, two decades of experience and a mature self-confidence certainly help: He knows the audience could walk out on him tonight, confronted with his uncompromising Guitar Drones, but he is not going to go soft on them or water down his vision in any way. His approach proves exactly right, as it is the simultaneous sophistication in arrangement and rawness in sound that have come to be his trademark, which win the public over.

Tonight’s set is the result of continous tweaking and fine-tuning as sound engineer Ronald tells me afterwards. Every passage now seems perfectly in its right place: The twilight-drenched introductory atmosphere, replete with melodic slides and pulsating bowel movements. The quiet transition breaking down the ambient texture into a single, yearning Guitar line. And the majestic finale, a reworking of the title track of his current full-length „Frenzy of the Absolute“. In this closing segment, Serries builds on two tones, ornamenting them with counterpoints and thick, scintillating chords until he is completely surrounded by luminous atmospheric drift. The sound is transparent and crystaline, full of pervasive bass thrust and pristine dewdrop-drones, sonorous yet never too loud or distorted.

The inclusion of a Drum Machine (soon to be replaced by a human percussionist on upcoming tours) adds a previously unavailable dimension of versatility and narration to the performance. Even though the focus is still firmly on the Drones, they seem to be aligned along the pulse of the metrum, locking listeners in a sludgey groove of psychedelic Doom. Towards the end, Serries improvises on top of the monster he’s created, before exiting the stage, leaving his loops to themselves and the audience to the still-life of an empty stage clad in holotropic sound. For a second, it is as if I can see the red-hot orange glow of irons exploding into miniature fireworks of glistening sparks, feel the biting cold of an Apple-flavoured Slush Puppie on my tongue and see surreal images being burned onto my retina. And then the music just stops, blown out like a candle in a storm of silence.