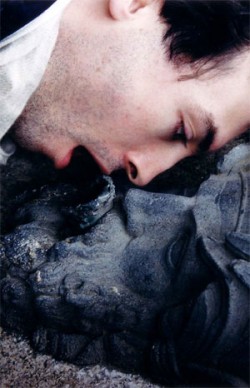 Usually, you’d be hard pressed finding a good reason not to attend the brilliant concerts taking place in Münster’s “Cuba”, but today, there is a simple argument in favour of staxing away: When I leave the house in the early evening, the streets are still beaming with the heat of the day, the air is humid and the weather extremely close. Obviously, even the most die-hard fans now find themselves in something of a Catch-22: Four concerts of experimental music on one night or sipping a cool Corona in the soft grass of the city’s gardens, parcs and beer gardens – it’s just no fair competition. Luckily, the line-up of today’s show is of such a kind that about 30 people have still decided to come. When I arrive, they are already casually flocking into the concert hall, drinks and smoking cigarettes in their hands. Inside, the picture is rather different from the usual stage: Seats have been placed around instruments, gear and laptops already glowing and blinking in the half-light, as if in an arena. It seems to be even hotter here than in the outside, which lends a feeling of excitment to the scene and puts us in a sort of trance even before the first note has been played. Then Dirk Serries comes up, shoulders his guitar and begins the ritual.

He has arrived well in the afternoon together with his sympathetic sound engineer Ronald at the dawn of a long tour of his FEAR FALLS BURNING project, which is as simple to explain as it is breathtaking to listen to and watch: One man, his guitar and a lot of effects in search of the perfect drone. The tour has been a success, even though attendance records have been weak for most parts, simply because of the sun and the blue skies. As he is slowly building up the first piece of the night, a pschedelic dreamscape with lots of shifting harmonies and subcutaneous dissonaces, I think to myself how strange this is. This music, when played live, is the sheer impersonation of raw nature, it is the gaze of the rocky mountains, the breath of the desert and it desperately wants to be heard in the heat. You can see it as a ritual of cleansing (I am somehow reminded of KILLING JOKE’s merciless exercise in self-flagelation “Pandemonium”) or as a chance to let your thoughts take a flight. This coincidence of absoluteness and total freedom is what makes these tracks so fascinating and, on a more general level, enjoyable. In concert, of course, the pressure is really on – because the compositions rely heavily on loops, each note becomes part of the piece for a certain amount of time and therefore in a way decides the path things are going to take. When the first drone has almost come to a halt, Serries hits one of the effect generators in front of him with his foot and a crunching sequence of two brutally distorted chords attacks the audience. This is one of his “signature songs”, which has been featured both on his tour album “First by a whisper, then by a storm” and on the double-CD debut “He spoke in dead tongues”. Tonight, the energy is even harsher, the chords are left hanging in the air for quite some time, with only some floating ambiances deepening the impact. Then, a totally spaced-out melody appears, metalic and ringing. Everything is taken to a different space, a pulsating tone appears out of nowhere, gains volume, then fights with the basic chord pattern, before everything ends abruptly. “Thank you”, Serries says, then the gig is over.

Now, GAUMEN takes the stage. One man and various small-sized boxes on a table in front of him. A knocking sound makes its appearance, weird and alien, like a fisher-price geiger counter. Then a drum pattern appears, seemingly from a spaced-out jazz-session, sweaty and ferociously fast. High-pitched screams pass by, as well as a sample of Bavarian tuba playing. These elements are then combined in various settings, always creating different moods. Suddenly and unexpectedly, though, a drone rears its head, rich in harmonics and full of mysteries. The tuba now pushes things from subsonic levels, pitched almost to the point of standing still. A technoid and funky rhythm emerges, the music gets all worked up, as is GAUMEN, who is moving his body to the beat, constantly throwing in new samples, getting louder and louder, wilder and wilder and seem to build a wall of noise heading for the sky. He then disassembles everything again and lulls the listeners to sleep with an ethereal piano piece as a musical goodbye and end to the show. An exhausting performance.

Then it is time fro STROTTER INST. Hailing from Switzerland, this is one of a new generation of artists, who are bringing new life to old school noise music. His entire presentation is at the brink of being gimmicky, but only until you hear the music. On what appear to be the worn-out frameworks of old ironing-boards, he has mounted five prepared record players, various effect machines and tubular light bulbs, glowing brightly and seductively. Across the record players, rubber bands have been streteched. Every single sound of the evening will come from these machines, no keyboard will be involved and no microphone. And yet the palet of colours STROTTER INST. generates from this limited material is mindblowing. Strotter comes in, dressed in an elegant suite and wearing mountaneer boots, then he turn to the music stand next to him, where the score to tonight’s proceedings has been carefully notated. He picks a record from his collection and starts the show – a simple and bumpy rhythm kicks in, greyishly industrial and monotonous. Slowly but surely, tiny elements are placed alongside the basic beat, adding flavours. Strotter occasionally mounts objects on the vinyl, making for clicking noises, then slows things down into a wide open space of multi-layered hissing. Again, a rhtyhm emerges, components are placed next to each other, searching for grip. This time, they intertwine like the wheels of a crazy machine, locking in and forging ahead. The groove is irresistible and the entire crowd seem to be dancing in and with their head. It is only now that I notice that the records have actually been prepared in advance: Some have been cut out, others have little rubber bands taped to them, which collide with the rubber stretched over the players, which make for flanging noises and grooves. The music goes and on, always changing and never staying in one place for too long. This could last forever. Eventually, though, the installation comes to an end and give way to what must amount to the most enthusiastic applause I have heard in this venue.

The last words of the evening belong to TIM HECKER. Without a doubt, Hecker is the nominal star of the night, with laudatios from some of the most influential sources of the experimental and independent music scene and recordings on equally famous and renowned labels. Regarding the totally uncommercial nature of his music, he has managed to kick it pretty far, and is now on an extended European tour. His is the optically most reduced set – nothing but his laptop, a mixer and a small device which looks like a transistor radio and is making a hell of a lot of noise. What exactly he is doing with his PC remains unclear to me – I am sitting right behind him and am able to see everything that’s happening on screen, but still have no clue, what these thousands of multi-coloured windows and boxes mean. Still, Hecker is moving around heavily on his seat, bending forwards and backwords, twisting the knobs and turning his head towards the speakers, in search of something. The music, though, remains on the same level throughout: Underneath crashing layers of noise, utterly beautiful harmonic progressions take place, dreaming like a bird in the eye of the hurricane.

Then the dream is over and people start flooding outside, towards the cool air of the evening, towards a cool drink and a last chat before going home. And everybody knows: Even though there were many reasons not to attend, it was a wise decision to do so nevertheless.