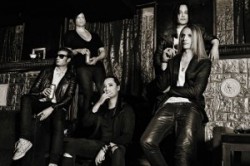 With lyrics inspired by Cyberpunk imagery and subculture Dope Stars Inc. have been mixing industrial beats, acid synths and distorted sounds with a bratty rock’n’roll sound and attitude since their foundation in May 2003. With their debut self-produced EP “10.000 Watts Of Artificial Pleasures” the band catched the interest of the international media and released 4 albums and 2 Ep with various record labels: “Neuromance” (2005), “Make A Star” (2006), “Gigahearts” (2006), “Morning Star” (2009), “21st Century Slave (2009) engaging through the years a large community of loyal fans spreading & sharing their music over the internet and global networks. Songs of Dope Stars Inc. also appeared on the soundtrack of the horror movie saga of Saw II, III and IV. Victor Love (producer, sound engineer and mastermind behind all songs of Dope Stars Inc.) also collaborated with many bands through the years producing remixes, or having songs of Dope Stars Inc. remixed, by bands such as Deathstars, KMFDM, Gothminister, The Birthday Massacre, Suicide Commando, Emilie Autumn, L’Ame immortelle, Samsas Traum, Kirlian Camera, Spectra Paris and more.

The band toured intensively between 2005 and 2010 performing on stages across all Europe, Russia, Japan and the US and supporting bands like London After Midnight, Kirlian Camera, ASP, Apoptygma Berzerk, Nightwish, Deathstars, Combichrist, My Dying Bride, Ministry, Suicide Commando and Diary of dreams among the others. The band also performed at the biggest European festivals such as Mera Luna, Wave Gotik Treffen, Amphi Festival, Summer Darkness, On A Dark Winter Night, Infest UK, Metalfest, Rock the lake, RGT and Trash Fest I, II and III. Between 2010 & 2011 all band’s obligations with record labels expired giving the opportunity to try a new model of marketing and distributing their muisic. On May 2011 the band released their 4th full length “Ultrawired”. The album was released for free and distributed independently leaving their fans to choose how to support the band with donations, free download & sharing/promotion, paid digital download or buying CDs & Merchandise. The album also appeared on the home page of The Pirate Bay, the famous torrent website, with a special advertisement/doodle scoring millions of downloads, that contributed to spread the name of the band worldwide. It was the first time in music history a band got featured on such a popular torrent website in the home page. Dope Stars Inc. have been indeed pioneers of the new digital era anticipating the changes of the music business and the free music model that is now reality. The successful experiment with their album Ultrawired contributed to inspire other bands to test new models of marketing in a world rapidly changing and demonstrated how the role of independent record labels changed during the growth of the global networks. After the release of Ultrawired Dope Stars Inc. made their first extensive tour in Russia (16 shows) and North America (15 shows) and festivals such as Wave Gotik Treffen, Castle Party, Dark Munich Festival, Regensburg Gothic Treffen and more club shows around Europe between 2011 and 2013.

After a break, during spring 2014 Dope Stars Inc. announced their return to work on a new album: TeraPunk. The album is described as a “terabyte of raw data straight to your face. A new ravenous synth’n’roll sensation of real instruments and artificial machines playing together.” The band presented and performed some songs with two special shows in Moscow and St Petersburg, released 3 song previews on SoundCloud and is going to perform the album in Germany with 3 club shows in Berlin, Frankfurt and Munich. The new album will have a distribution model that is an evolution of the previous ones. In a world where free music is now reality, Dope Stars Inc. decided to provide to their fans all the options possible. Keeping the control over digital distribution & their rights on all songs to ensure their independence, the band decided to transfer the sole management of physical CD & Vinyl distribution to one independent local label for each country and hired promoters directly to push the new album over media while keeping direct contact with their fans through the internet and social media.

This way Dope Stars Inc. is an active and independent party in the distribution & promotion while providing their music for free and leaving the fans to decide how to support them and making happy also those fans who still want to get a physical copy distributed through the regular channels.