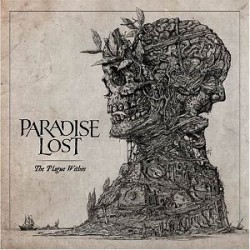 Returning with opus number fourteen ‘The Plague Within’ (released June 1st, 2015), Paradise Lost are once again refining the chemical equation to their sonic alchemy with the kind of creative invincibility few can afford. It’s a collection of songs that will surprise even the most seasoned of fans in its ambition: a monochrome miasma of morbidly uplifting anthems and heart-aching melancholia. Theirs is a pain born of the human condition itself as our fragile minds struggle to cope in a world overrun by demons…

Produced by Jaime Gomez Arellano (Ghost, Ulver, Cathedral) at London’s Orgone Studios, the frostbitten riffs thunder beneath the bittersweet euphoria of Nick’s vocals, drifting between rich melodic soars and icy snarls. It’s an organic body of work that confronts the trials and tribulations of struggling alone in darkness, but also one that treads incredibly exciting and genuinely ‘new’ sonic ground in the process.

The cover artwork was created by the polish artist, illustrator and architect Zbigniew M. Bielak, best known in the musical realm for his record cover illustrations, which among others include meticulously handcrafted artworks of Watain, Ghost or Entombed A.D. albums. Zbigniew comments:

“Since their late 80’s inception, through somber abrasiveness of their debut and harrowing tristesse of groundbreaking ‘Gothic’, the unparalelled icons of gloom, Paradise Lost grew deep into all things murky and dreadful in modern music. Let alone Duncan Fergado’s artwork for their ‘Lost Paradise’ debut remains one of my fave covers, so having heard that with ‘Plague Within’ the band harks back to days of old, was – to say the least – a thrilling incentive to pick up the commision.
It was also a rare joy to see how prelimnarily calm and reflective Arcimboldian artwork, kept becoming ever darker and more sinister past each of Nick’s and Greg’s scrutinies, to finally become what one can see on the actual cover. A portrait of hopless decrepitude of mental illness – which is what ‘Plague Within’ deals with thematically – where the tormented Sisyphus struggles to push his burden back up the slippery walls of a long frozen illusion.”